The Olympic flame made one of its final relays Thursday on the eve of the Olympic Games opening ceremony as torchbearers carried it along the ancient Great Wall of China, according to AP.

After a short ceremony at the landmark Badaling section of the heritage site, hundreds of fans waving yellow and red pompoms cheered on the first torchbearer, Li Zhonghua.

"If you don`t go to the Great Wall, then you`re not a real man," said Li, one of China`s most famous test pilots, who was quoting the late Chairman Mao Zedong. "It`s appropriate for a soldier to start the torch relay for the Great Wall leg, because the Great Wall is a symbol of China and a symbol of the People`s Liberation Army."

Rousing music blared through speakers, backed by live drums and the crash of cymbals in a carefully choreographed ceremony, in which a local Communist Party secretary was the first to hold the torch aloft as the crowd was showered in confetti. 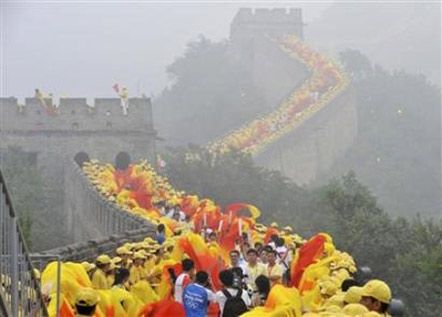 The Great Wall is a UNESCO world heritage site, and was started in China`s first dynasty, the Qin Dynasty, in 220 B.C., to protect the court from nomadic invaders to the north, although large parts were completed in the Ming Dynasty starting in the 14th century.

Badaling is the tourist leg of the Great Wall. The 15-minute run along the ancient bricks brought the torch one step closer to ending its long and contentious global tour, which officially concludes Friday night with the lighting of the cauldron during the opening ceremonies of the 29th games. 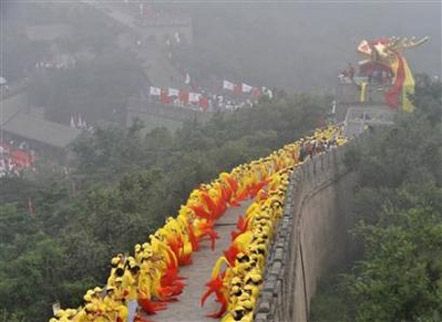 Where the flame will rest when it arrives at Beijing National Stadium — known as the Bird`s Nest — remains a carefully guarded secret.

Eighteen runners carried the torch along the Great Wall as 2,008 gray pigeons were released in the air.

The spectacle marks one of the final steps in China`s seven years of preparations for the games — a journey that has cost billions of dollars and one that the communist government hopes will end with the country`s symbolic debut as a modern world power.