Syrian government troops backed by Russia and fighters backed by the United States made separate advances against Islamic State on Friday, gaining ground in new offensives that have put unprecedented pressure on the self-declared caliphate, according to Reuters. 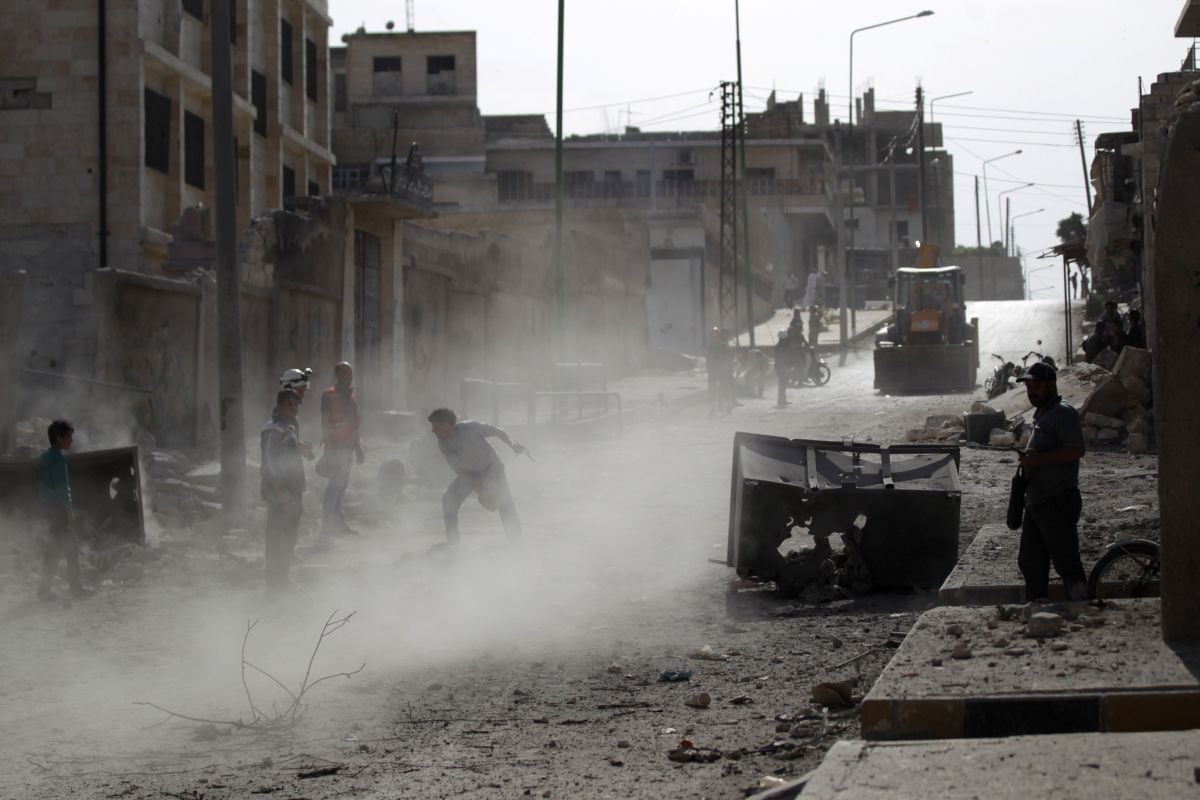 In neighboring Iraq, government troops also fought for territory in an Islamic State bastion near Baghdad. There was no confirmation of an Iraqi media report that Islamic State leader Abu Bakr al-Baghdadi had been wounded in U.S.-led air strikes, Reuters wrote.

Two years after the ultra-hardline group proclaimed its caliphate to rule over all Muslims from swathes of territory in Iraq and Syria, its many foes are advancing on a number of fronts in both countries, with the aim of closing in on its two capitals, Raqqa in Syria and Mosul in Iraq.

A U.S.-backed militia, the Syria Democratic Forces (SDF), launched an offensive last week to capture the last stretch of Turkish-Syrian border still in Islamic State hands and have surrounded the main city in the area, Manbij.

The Syrian Observatory for Human Rights monitoring group said the SDF, which is backed by U.S. air support and special forces, took control of the last route into Manbij on Friday.

Read alsoReuters: Syrian and Russian aircraft step up bombing of Aleppo cityFurther south, government troops and their allies, backed by Russia, captured a crossroads in Raqqa province that controls a highway leading to Tabqa, an Islamic State-held city on the Euphrates River, and Raqqa city itself, the Observatory and the army said.

The army also launched its advance last week in what media sympathetic to Damascus have described as a "race to Raqqa" - to take territory in Islamic State's heartland before the U.S.-backed militia get their first.

Over the past two years Islamic State, also known as ISIS, ISIL and Daesh, has made enemies of all global powers and regional governments. It has imposed harsh rule over millions of people in Syria and Iraq, carried out mass killings and rapes, joined conflicts in Libya, Yemen and Afghanistan and claimed responsibility for deadly attacks in Paris and Brussels.

Read alsoEuronews Exclusive: Ukraine says French national had plans for 15 attacks in FranceAttempts to coordinate a campaign against it have been undermined by a five-year multi-sided civil war in Syria and the weakness of the Iraqi state. Still, Washington and other powers hope this year could see assaults on Raqqa and Mosul that would bring the caliphate down.

The SDF advance is the most ambitious yet in Syria by a group allied to Washington, which has previously struggled to develop capable allies on the ground in Syria's civil war.

It appears to have provoked Moscow and its ally, Syrian President Bashar al-Assad, to turn their fire on Islamic State as well, after months in which the West criticized Russia for mainly striking other enemies of Assad.

On a separate front, in the Syrian civil war, U.N. aid convoys reached two rebel-held suburbs of Damascus on Friday. The shipment to Daraya was the first food aid since 2012 to reach a town where the United Nations says residents are suffering from malnutrition. However, the local council said the aid was too little to feed people for a month as promised.

Bringing aid to besieged areas is a crucial part of diplomatic efforts to end the wider conflict, sponsored since last year by Washington and Moscow but so far fruitless.

In Iraq, U.S. and Iraqi officials said on Friday they could not confirm a report by an Iraqi TV channel that Islamic State leader Baghdadi had been wounded in an air strike in the north of the country.

A spokesman for the U.S.-led coalition fighting the Islamist militants, Colonel Chris Garver, said in an email that he had seen the reports but had "nothing to confirm this at this time". Kurdish and Arab security officials in northern Iraq said they also could not confirm the report.

Al Sumariya TV cited a local source in the northern province of Nineveh surrounding Mosul as saying that Baghdadi and other Islamic State leaders were wounded on Thursday in a coalition air strike on one of the group's headquarters close to the Syrian border. The channel has good connections with Shi'ite politicians and Iraqi forces.

Reports that Baghdadi, whose real name is Ibrahim al-Samarrai, had been killed or wounded have emerged periodically during the conflict but have never been confirmed.

A Kurdish intelligence official said the U.S.-led coalition had conducted a raid in the area this week. The coalition has not confirmed this.

Kurdish Peshmerga forces are positioned in an arc around the north and east of Mosul while the Iraqi army is trying to capture Falluja, 50 km (30 miles) west of Baghdad.

The army's elite Counter Terrorism Service was battling on Friday in al-Shuhada, a southern district of Falluja, a Reuters photographer reported from the scene.

Loud explosions and bursts of gunfire were heard from the district, while aircraft believed to belong to the U.S.-led coalition flew overhead. Iraqi soldiers took up positions in a construction site while explosions and clouds of smoke rose up from the battlefield.

Al-Shuhada marks the first advance of the army inside the built-up area of Falluja, after they entered rural districts on the outskirts last week. Falluja has long been an insurgent stronghold, where U.S. forces faced the heaviest battles of their 2003-2011 occupation of Iraq.

Iraqi Prime Minister Haider al-Abadi launched the assault there to improve security in the nearby capital after a series of suicide bombings.

The risky assault veers from the battle plan of his U.S. allies who want the army to focus on Mosul instead, rather than risk being bogged down in potentially hostile territory. But success would give Baghdad control of the main population centers of the Euphrates valley west of the capital for the first time in two years.

The United Nations says up to 90,000 civilians remain in Falluja, under "harrowing" conditions with little access to food, water and healthcare, and no safe exit routes.

Read alsoIraqi army 'begins operation to storm' ISIL-held FallujaThe insurgents have dug a network of tunnels to move around without being detected and planted thousands of mines and explosive devices to delay the army's advance.

The Iraqi army is also massing tanks and troops south of Mosul, in preparation for an offensive planned later this year to retake the largest city under the control of the militants.