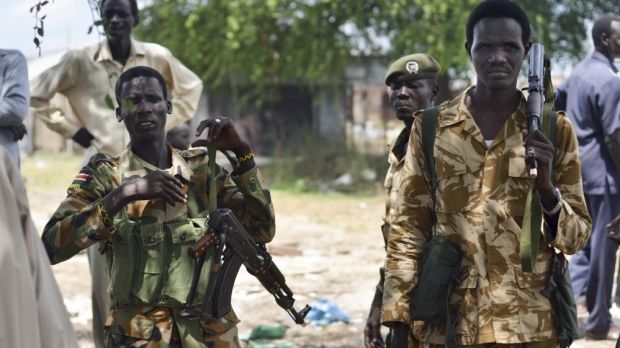 Rebels in South Sudan / An illustrative photo from Al Jazeera

The fighting broke out on Thursday and Friday between troops loyal to President Salva Kiir and soldiers who support vice president Riek Machar, Reuters wrote.

The violence has raised fears South Sudan could face more instability after emerging from a two-year civil war, which began in December 2013 after Kiir sacked Machar as vice president.

On Saturday Juba was calm, but on Sunday a Reuters witness said gunfire was heard in Gudele and Jebel suburbs of Juba, near the military barracks that hosts troops loyal to Machar.

"For about 30 to 40 minutes we heard sounds of heavy artillery in the direction of Jebel area," an aide worker based in Juba who did not want to be named told Reuters.

South Sudan's civil war was fought largely along ethnic lines with Kiir, a Dinka, and Machar, a Nuer, drawing support from their respective tribes.

Read alsoUN: 30,000 people face starvation in South SudanA peace agreement last August ended the war but Kiir and Machar have yet to integrate their forces, a key part of the peace deal.

U.N. Secretary-General Ban Ki-moon said on Friday the latest violence highlighted a lack of commitment to the peace process and urged the country's leaders to end the fighting, discipline military leaders and work together to implement the peace deal.