Hundreds of thousands of people have been fleeing the southern US coast as Hurricane Gustav approaches land, according to BBC.

Authorities have ordered the evacuation of New Orleans and an estimated 1.9 million people along the Gulf coast have been heading inland.

The Category Three storm is expected to make landfall at midday local time.

The storm has prompted the Republicans to scale back their national convention where John McCain is due to accept the party`s nomination for president.

Forecasters at the US National Hurricane Center say that at the current speed, the centre of the storm would hit the coast by midday local time.

The US National Hurricane Center warned Gustav was packing winds of 115 mph (185km/h) and could bring "extremely dangerous" storm surges 14ft (4.2m) above normal. Isolated tornadoes are also possible in the area.

A dusk-to-dawn curfew is in force in New Orleans, which is described as being like a ghost town. The 7,000-strong Louisiana national guard has been mobilised and support requested from other states. The New Orleans mayor has warned looters will be sent to jail.

Crime was a major problem in the New Orleans area in the aftermath of Hurricane Katrina, which hit the city three years ago, causing disastrous floods.

The exodus of an estimated 1.9 million people from the Louisiana coast is said to be the largest evacuation in state history.

Roads out of New Orleans - much of which lies below sea level - were crammed with traffic throughout Sunday.

Louisiana Governor Bobby Jindal appealed to residents: "If you`re hearing this, seeing this, if you`ve not evacuated, please do so. There`s still a few hours left."

New Orleans Mayor Ray Nagin told local TV only about 10,000 residents remained in the city, where rain began falling at sunset on Sunday.

He said the first storm winds could hit New Orleans at daybreak on Monday and Gustav could reach Category Four strength.

The BBC`s Kevin Connolly, in New Orleans, says the mood among the city`s remaining residents is of hope and fear.

Sandra Taylor, from Lafayette, Indiana, is visiting her daughter, who had a baby nine days ago.

"Where we live it`s not in a flood zone, and we`re quite sheltered," she said. "There`s a few that have battened down, and sealed all the windows and stuff and disappeared. But there`s a lot of other neighbours around, so I think we`re just going to play the three little pigs - if one house blows away, we`ll shift to the next one."

In 2005, three-quarters of New Orleans was flooded by a storm surge that claimed more than 1,800 lives in coastal areas.

All eyes will now be on the city`s levees, which Category Three storm Katrina swept away under a wall of mud and water.

The storm has already claimed the lives of more than 80 people in the Caribbean, causing widespread damage in Haiti, the Dominican Republic and Jamaica over the past week.

At least 300,000 people were evacuated in Cuba as the storm brought extensive flooding and some severe damage, but no reports of deaths. 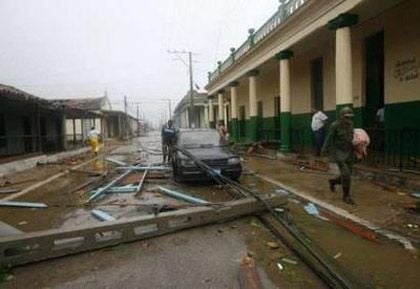