Hillary Clinton secured the Democratic Party's White House nomination, coming back from a stinging defeat in her first presidential run in 2008 and surviving a bitter primary fight to become the first woman to head the ticket of a major party in U.S. history, according to Reuters. 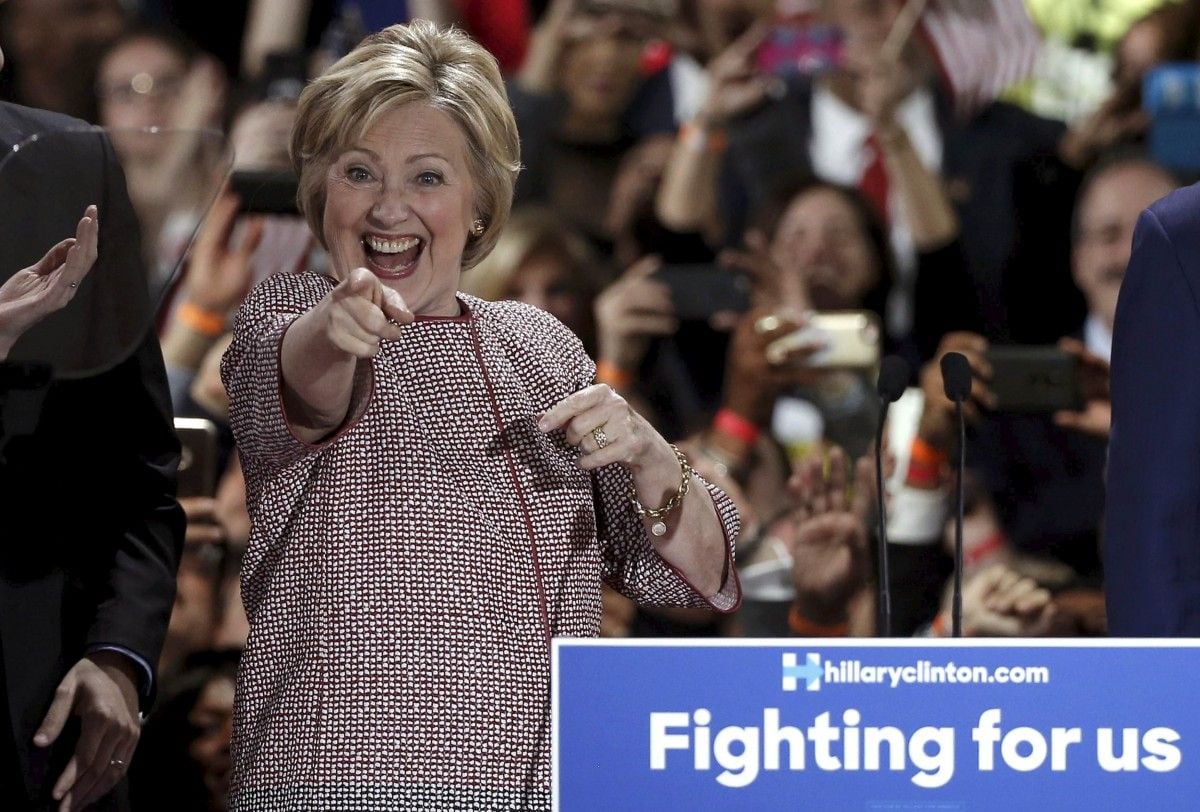 In a symbolic show of party unity, Clinton's former rival, U.S. Senator Bernie Sanders of Vermont, told the chairwoman from the convention floor that Clinton, 68, should be selected as the party's nominee at the dramatic climax of a state-by-state roll call at the Democratic convention in Philadelphia, Reuters wrote.

Capping nearly a quarter century in public life, Clinton will become the party's standard-bearer against Republican nominee Donald Trump in the Nov. 8 election when she accepts the nomination on Thursday.

"If there are any little girls out there who stayed up late to watch, let me just say: I may become the first woman president, but one of you is next," Clinton told the convention via a video satellite link.

In nominating Clinton, delegates made the point that the selection of a woman was a milestone in America's 240-year-old history. Women got the right to vote in 1920 after ratification of the 19th Amendment to the U.S. Constitution.

Clinton's husband, former President Bill Clinton, portrayed her in a speech to the convention as a dynamic force for change as he made a case for her White House bid.

"Hillary is uniquely qualified to seize the opportunities and reduce the risks we face, and she is still the best darn change-maker I have ever known," he said, hitting back at Republican arguments she is a Washington insider tied to the status quo.

The Democratic nominee, who promises to tackle income inequality, tighten gun control and rein in Wall Street if she becomes president, is eager to portray Trump, a businessman and former reality TV show host, as too unstable to sit in the Oval Office.

Trump, 70, who has never held elective office, got a boost in opinion polls from his nomination at the Republican convention last week. He had a 2-point lead over Clinton in a Reuters/Ipsos opinion poll released on Tuesday, the first time he has been ahead since early May.

Sanders has endorsed Clinton, but some of his supporters protested in Philadelphia against the party leadership's apparent backing of her during the Democratic primary fight.

Outside the convention hall, protests turned more heated late on Tuesday. Thousands of protesters gathered near a subway station close to the convention center although a heavy police presence and barricades kept them far from convention guests. Among the protesters were Sanders supporters and Black Lives Matter activists.

At least three people clambered over perimeter fences and were arrested. Some set up a candlelight vigil, sang songs and chanted "Election fraud," in apparent reference to leaked emails that showed the Democratic National Committee tried to undermine Sanders' campaign.

Earlier on Tuesday, delegates from South Dakota had given Clinton 15 votes, formally ensuring that she had more than the 2,383 votes needed to win the nomination. She emerged with a total of 2,842 votes to Sanders' 1,865.

Two delegates held up a red banner emblazoned "History" in white letters as Clinton's face showed up on the screen.

In 2008, she lost a hard-fought nomination battle to first-term U.S. Senator Barack Obama, who went on to become America's first black president.

Bill Clinton's speech on Tuesday night offered an unusual twist to the warm spousal endorsement of a presidential candidate traditionally given at party conventions by a wife, not a man – let alone a former president of the United States.

He said Hillary had been a political activist since the couple's early days as law students together. He told how she gave legal aid services to poor people and went undercover to expose a segregationist school in Alabama in the 1970s.

Clinton put forth an alternative narrative to the Republican portrayal of his wife as a power-hungry politician who bends the rules and lacks transparency in her political dealings.

Polls show many Americans distrust Hillary Clinton. Controversy over her use of a private email server for official business while she served as America's top diplomat dogged her during the primary election season.

She came under relentless attack at the Republican convention in Cleveland, as speakers assailed her over the email controversy and her record as secretary of state and painted her as out of touch with ordinary Americans. Delegates weighed in with repeated chants of "Lock her up."

"They’re running against a cartoon," Bill Clinton said in his speech. "Cartoons are two-dimensional, they’re easy to absorb. Life in the real world is complicated and real change is hard, and a lot of people even think it’s boring."

Then speaking directly to the crowd, he said to cheers and applause: "Good for you because earlier today you nominated the real one."

President from 1993 to 2001, Bill Clinton, 69, left office with high approval ratings and is known as one of the most powerful political orators in the country.

Trump appeared to approve of Bill Clinton's appearance. "Smart move by the Democrats to have Pres. @billclinton play a key role in their convention," he wrote on Twitter.

Supporters of Hillary Clinton say her Washington credentials show she has the experience needed for the White House during tough times as the United States tries to hasten its economic recovery and tackle challenges abroad like Islamic State and the rise of China.