After the first tour of duty in February 2016 the Tu-214R has returned to Latakia, according to The Aviationist. 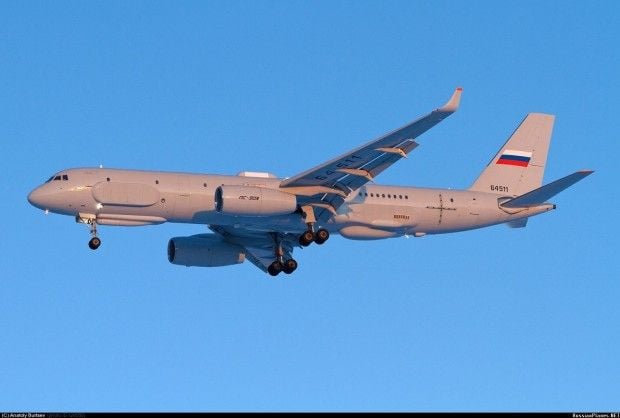 The Tu-214R is the most modern Russian ISR (Intelligence Surveillance Reconnaissance) aircraft, The Aviationist wrote.

Equipped with sensors to perform ELINT (Electronic Intelligence) and SIGINT (Signal Intelligence) missions as well as with all-weather radar systems and electro-optical sensors that produce photo-like imagery of a large parts of the ground the special mission aircraft, the aircraft can fly multiple intelligence gathering missions: it can intercept and analyze signals emitted by targeted systems (radars, aircraft, radios, combat vehicles, mobile phones etc.) while collecting imagery that can be used to identify and pinpoint the enemy forces, even if these are camouflaged or hidden.

Built by KAPO (Kazan Aircraft Production Association) and flown from the company's airfield in Kazan, the Tu-214R registered RA-64514, serial number 42305014, the second of the two examples of this kind of aircraft built under contract with Russia's Ministry of Defense (the other being serialled RA-64511), deployed to Latakia airbase in Syria, between February 15 and 29, 2016.

Interestingly, RA-64514 has not finished with Syria yet: on July 29, the aircraft flew from Moscow to Syria, where it landed at 03:23 LT, as the Flightradar24.com ADS-B tracking show.

The aircraft, that features the same types of external bulges of other very well-known intelligence gathering planes, as the U.S. RC-135 or the Israeli B-707 with the Phalcon system, along with minor differences with the first operative Tu-214R, RA-64511, serial number 42305011, will probably spy on Daesh while testing some of its onboard sensor packages: the aircraft is believed to be still under development and the Syrian battlefield has already been used as a real testbed for new weapons systems by the Russian Aerospace Forces since Moscow started the air war in Syria back in October 2015.