President Viktor F. Yanukovych, who owed his election to, as an American diplomat put it, an "extreme makeover" Mr. Manafort oversaw, bolted the country in the face of violent street protests. He found sanctuary in Russia and never returned, as his patron, President Vladimir V. Putin, proceeded to dismember Ukraine, annexing Crimea and fomenting a war in two other provinces that continues, NYT reports.

Within months of his client's political demise, he went to work seeking to bring his disgraced party back to power, much as he had Mr. Yanukovych himself nearly a decade earlier. Mr. Manafort has already had some success, with former Yanukovych loyalists — and some Communists — forming a new bloc opposing Ukraine's struggling pro-Western government.

And now Mr. Manafort has taken on a much larger campaign, seeking to turn Donald J. Trump into a winning presidential candidate.

With Mr. Putin's Russia, and its interference in Ukraine, becoming a focus of the United States presidential campaign, Mr. Manafort's work in Ukraine has come under scrutiny — along with his business dealings with prominent Ukrainian and Russian tycoons.

After disclosures of a breach of the Democratic National Committee's emails — which American intelligence officials have linked to Russian spies— both men are facing sharp criticism over what is seen as an unusually sympathetic view of Mr. Putin and his policies toward Ukraine. That view has upended decades of party orthodoxy toward Russia, a country that the previous Republican presidential nominee, Mitt Romney, called "our No. 1 geopolitical foe."

On Sunday, Mr. Trump even echoed Mr. Putin's justification of the annexation of Crimea, saying the majority of people in the region wanted to be part of Russia, remarks that were prominently featured on state news channels in Moscow.

It is far from certain that Mr. Manafort's views have directly shaped Mr. Trump's, since Mr. Trump spoke favorably of Mr. Putin's leadership before Mr. Manafort joined the campaign. But it is clear that the two have a shared view of Russia and neighbors like Ukraine — an affection, even — that, in Mr. Manafort's case, has been shaped by years of business dealings as much as by any policy or ideology.

"I wouldn't put out any moral arguments about his work," said Yevgeny E. Kopachko, a pollster with Mr. Yanukovych's former party who cooperated with Mr. Manafort for years and called him a pragmatic and effective strategist. "Nobody has a monopoly on truth and morals."

Mr. Manafort did not respond to requests for an interview. In television interviews on Sunday, though, he defended Mr. Trump's views on Russia, saying that as president, Mr. Trump would be firm with Russia but would deal with it like any other country when doing so suited American interests.

"He views Russia as a foreign power that has its own interests at stake," Mr. Manafort said on CBS's "Face the Nation."

Until he joined Mr. Trump's presidential campaign this year, Mr. Manafort's work in Ukraine had been his most significant political campaign in recent years. He began his career in Republican politics in the 1970s and extended it overseas to advising authoritarian leaders, including Mobutu Sese Seko in Zaire, Ferdinand Marcos in the Philippines and Mr. Yanukovych.

Mr. Manafort, 67, is the scion of an immigrant family that built a construction business in Connecticut. A lawyer by education, he served briefly in the Reagan administration before devoting himself to politics and later to business. A review of his work in Ukraine shows how politics and business converged in a country still struggling to function as a democracy, a quarter of a century after it had gained independence with the collapse of the Soviet Union. In that world in flux, Mr. Manafort's political strategy had echoes of Mr. Trump's populist campaign.

Mr. Manafort's influence in the country was significant, and his political expertise deeply valued, according to Ukrainian politicians and officials who worked with him. He also had a voice in decisions about major American investments in Ukraine, said a former spokesman for Ukraine's foreign ministry, Oleg Voloshyn, who also ran as a candidate in the new bloc Mr. Manafort helped form.

He persuaded the government to lower grain export tariffs, a change that benefited agribusiness investors like Cargill, and to open negotiations with Chevron and Exxon for oil and natural gas exploration in the country. 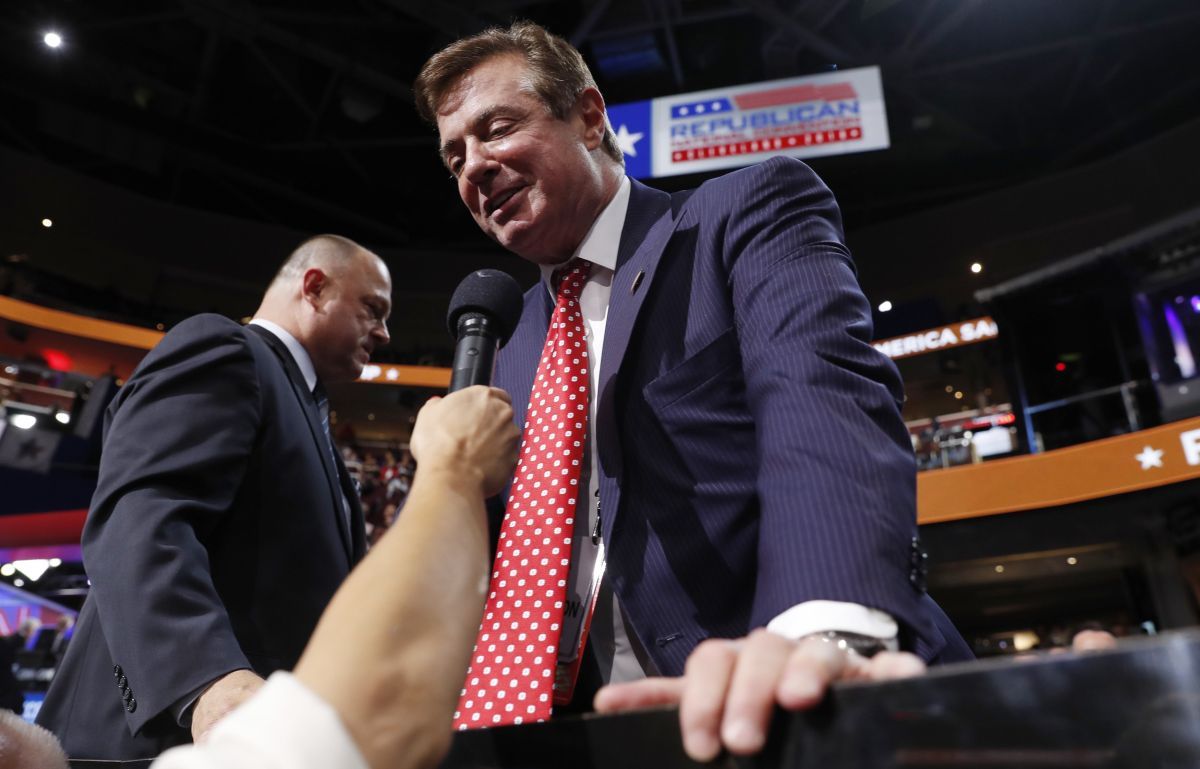 Mr. Manafort began working in Ukraine after the popular uprising in the winter of 2004-5 that became known as the Orange Revolution. Mr. Yanukovych, then prime minister, was declared the winner of a presidential election in 2004 that was marred by fraud and overturned by the country's highest court after weeks of protests in favor of his pro-Western rival, Viktor A. Yushchenko.

Mr. Yanukovych had relied disastrously on Russian political advisers who underestimated voter frustration. After his defeat, he turned to American experts.

Mr. Manafort had begun working for one of Ukraine's richest men, Rinat Akhmetov, to improve the image of his companies. Mr. Akhmetov was also a prominent sponsor of Mr. Yanukovych's party, the Party of Regions, and he introduced the two men.

With Mr. Manafort's advice, Mr. Yanukovych began a comeback, with the Party of Regions winning the biggest bloc in parliamentary elections in 2006 and again in 2007, returning him to the post of prime minister. At the time, Mr. Manafort called Mr. Yanukovych, a former coal trucking director who was twice convicted of assault as a young man, an outstanding leader who had been badly misunderstood in the West.

According to State Department cables at the time and later released by WikiLeaks, Mr. Manafort and his colleagues Phil Griffin and Catherine Barnes frequently pressed American diplomats in Ukraine to treat Mr. Yanukovych and his supporters equally so as not to risk being seen as favoring his opponents in the new elections. With Mr. Manafort's help, the party was "working to change its image from that of a haven for mobsters into that of a legitimate political party," the American ambassador at the time, John E. Herbst, wrote.

During this time, lucrative side deals opened for Mr. Manafort.

Read alsoTrump: Taking back Crimea would trigger World War IIIIn 2008, he and the developer Arthur G. Cohen negotiated a deal to buy the site of the Drake Hotel on Park Avenue in Manhattan. One partner was Dmytro Firtash, an oligarch who made billions as a middleman for Gazprom, the Russian natural gas giant, and who was known for funneling the money into the campaigns of pro-Russian politicians in Ukraine, including Mr. Yanukovych. The three men intended to reopen the site as a mall and spa called Bulgari Tower, according to a lawsuit filed in Manhattan by Yulia V. Tymoshenko, a former prime minister of Ukraine. In the end, though, the project unraveled.

A separate deal also funneled Russian-linked oligarchic money into Ukraine. In 2007, Mr. Manafort and two partners, Rick Gates and Rick Davis, set up a private equity company in the Cayman Islands to buy assets in Ukraine, and invited the Russian oligarch Oleg Deripaska to invest, according to a court filing. Mr. Deripaska agreed to pay a 2 percent annual management fee to Mr. Manafort and his partners, and put $100 million into the fund, which bought a cable television station in the Black Sea port of Odessa, Ukraine, before the agreement unraveled in disagreements over auditing and Mr. Deripaska sued Mr. Manafort. The case is still pending.

By 2010, Mr. Yanukovych's revival was complete. He had won a presidential campaign against Ms. Tymoshenko, who was convicted of abuse of office and sent to prison.

Mr. Kopachko, the pollster, said Mr. Manafort envisioned an approach that exploited regional and ethnic peculiarities in voting, tapping the disenfranchisement of those who felt abandoned by the Orange Revolution in eastern Ukraine, which has more ethnic Russians and Russian speakers.

Konstantin Grishchenko, a former foreign minister and a deputy prime minister under Mr. Yanukovych, said in a telephone interview that Mr. Manafort had ultimately grown disillusioned with his client.

Mr. Manafort pressed Mr. Yanukovych to sign an agreement with the European Union that would link the country closer to the West — and lobbied for the Americans to support Ukraine's membership, as well, despite deep reservations because of the prosecution of Ms. Tymoshenko.

Mr. Manafort's role was disclosed after a document was discovered in a box in a sauna belonging to a former senior Ukrainian official. Other documents in that cache are now evidence in a criminal case against a former justice official, and could shed more light on Mr. Manafort's role.

Mr. Manafort's chance for a comeback, however, came sooner than anyone had expected.

He was now on the payroll of Mr. Yanukovych's former chief of staff, Serhiy Lyovochkin. Mr. Manafort flew to Ukraine in September 2014 and set to work rebranding a party deeply fractured by the violence and by Russia's intervention.

Rather than try to resurrect the disgraced party, he supported pitching a bigger political tent to help his clients and, he argued, to help stabilize Ukraine. The new bloc would woo everyone in the country angry at the new Western-backed government.

It was Mr. Manafort who had argued for a new name for the movement — the Opposition Bloc, or Oppo Bloc, as it was called. "He thought to gather the largest number of people opposed to the current government, you needed to avoid anything concrete, and just become a symbol of being opposed," recalled Mikhail B. Pogrebinsky, a political analyst in Kyiv.

The strategy worked. Under the new name, the Party of Regions kept a foothold in Parliament. Its new bloc now has 43 members in the 450-seat chamber.

It is not clear that Mr. Manafort's work in Ukraine ended with his work with Mr. Trump's campaign. A communications aide for Mr. Lyovochkin, who financed Mr. Manafort's work, declined to say whether he was still on retainer or how much he had been paid.

Mr. Manafort has not registered as a lobbyist representing Ukraine, which would require disclosing his earnings, though at least one company he subcontracted, the public relations firm Edelman, did in 2008. It received a retainer of $35,000 a month to promote Mr. Yanukovych's efforts as prime minister "toward making Ukraine a more democratic country."