The United States on Sunday called Russia's action in Syria "barbarism," not counter-terrorism, while Moscow's U.N. envoy said ending the war "is almost an impossible task now" as Syrian government forces, backed by Moscow, bombed the city of Aleppo, according to Reuters. 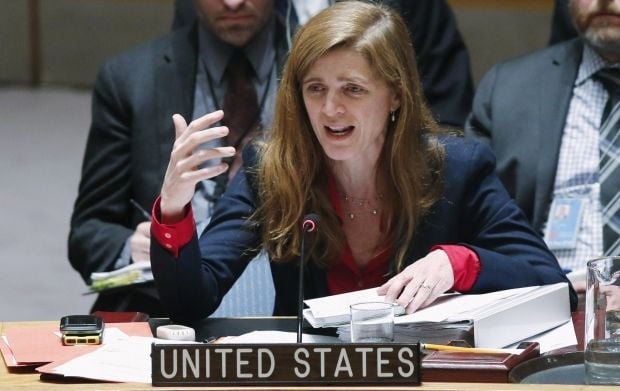 The United Nations Security Council met on Sunday at the request of the United States, Britain and France to discuss the escalation of fighting in Aleppo following the announcement on Thursday of an offensive by the Syrian army to retake the city, Reuters wrote.

"What Russia is sponsoring and doing is not counter-terrorism, it is barbarism," U.S. Ambassador to the United Nations, Samantha Power, told the 15-member council.

Read alsoRussian U.N. ambassador: peace in Syria 'is almost an impossible task now' – media"Instead of pursuing peace, Russia and Assad make war. Instead of helping get life-saving aid to civilians, Russia and Assad are bombing the humanitarian convoys, hospitals and first responders who are trying desperately to keep people alive," Power said.

A September 9 ceasefire deal between U.S. Secretary of State John Kerry and Russian Foreign Minister Sergei Lavrov aimed at putting Syria's peace process back on track effectively collapsed on Monday when an aid convoy was bombed.

"In Syria hundreds of armed groups are being armed, the territory of the country is being bombed indiscriminately and bringing a peace is almost an impossible task now because of this," Russian U.N. Ambassador Vitaly Churkin told the council.

Britain's U.N. ambassador, Matthew Rycroft, said on Sunday the U.S. and Russian bid to bring peace to Syria "is very, very near the end of its life and yes the Security Council needs to be ready to fulfill our responsibilities."

"The regime and Russia have instead plunged to new depths and unleashed a new hell on Aleppo," Rycroft told the council. "Russia is partnering with the Syrian regime to carry out war crimes."

However, Russia is one of five veto-powers on the council, along with the United States, France, Britain and China. Russia and China have protected Syrian President Bashar al-Assad's government by blocking several attempts at council action.

"It is time to say who is carrying out those air strikes and who is killing civilians," Power said. "Russia holds a permanent seat on the U.N. Security Council. This is a privilege and it is a responsibility. Yet in Syria and in Aleppo, Russia is abusing this historic privilege."

"Any political solution can only be successful by providing the requisite conditions through intensified efforts to fight terrorism," Ja'afari told the council. "The real war on terrorism has never started yet. The advent of Syrian victory is imminent."

Read alsoReuters: Warplanes press attack on rebel-held eastern AleppoU.N. Syria mediator Staffan de Mistura briefed the council meeting on Sunday. He appealed to the council to come up with a way to enforce a cessation of hostilities in Syria.

"I am still convinced that we can turn the course of events. We have proven this more than once before," he said, adding that he would not quit trying to bring peace in Syria.