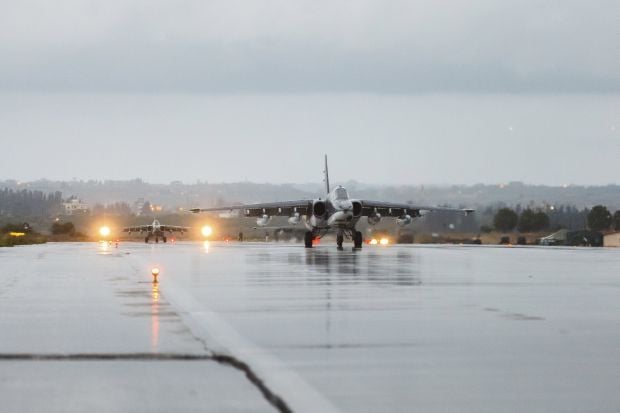 "They make a desert and call it peace," wrote the Roman historian Tacitus, quoting an enemy of Rome about its brutal conquests. The same could be said today of Bashar Assad and his ally Russian President Vladimir Putin in Syria, McCain wrote in his article in The Wall Street Journal titled "Stop Assad Now—Or Expect Years of War" published on October 4, 2016.

At this moment, Syrian and Russian forces, together with Iranian and Hezbollah militia fighters, are preparing to finish their siege of Aleppo. The 275,000 people who reportedly remain in the city are being told to flee. Thousands will do so, choosing to become refugees. The poor souls who remain in Aleppo will suffer a surge in relentless, indiscriminate bombing. And when Mr. Assad, Mr. Putin and their allies have slaughtered all that stand in their way, they will proclaim peace in the bloody sands of the Syrian desert.

The collapse of the most recent cessation of hostilities is not surprising. It failed, as did the Obama administration's previous efforts to work with Russia in Syria, because as former Secretary of State George Shultz once said, "diplomacy not backed by strength will always be ineffectual at best, dangerous at worst."

America's intrepid secretary of state has now taken the meaningless step of suspending talks with Russia over Syria. Meanwhile, Mr. Assad and Mr. Putin are creating military facts on the ground in Syria that will enable them to dictate the terms of a peace secured by carnage. They have decimated coalition-backed Syrian groups, slaughtered countless civilians, consolidated the Syrian regime's hold on power, and even struck a United Nations humanitarian-aid convoy. And they have done all of this with no consequences. Thus the war grinds on.

Read alsoRussia deploys advanced anti-missile system to Syria for first time – Fox NewsWhile the U.S.-led coalition is making progress in the fight against Islamic State, we cannot forget this terrorist organization is a symptom of the Syrian civil war. The future of that conflict will have significant strategic impact on U.S. national security.

The war in Syria has claimed more than 400,000 lives, displaced half the country's population, and inflamed sectarian tensions across the Middle East. But as bad as this conflict is now, it can get much worse—and likely will. It will produce millions more refugees, undermining regional stability and straining the social fabric of Western nations. It will strengthen an anti-American alliance of Russia and Iran. U.S. credibility with our closest security partners in the Middle East will further erode. And it will provide ISIS, or its successor groups, fertile ground to radicalize Muslims, recruit and inspire them to fight, and provide them with dangerous battlefield experience.

This is where the conflict in Syria is headed, and the administration still has no strategy to do anything about it. Its diplomacy is toothless. And there appears to be no Plan B.

An alternative plan would not come without costs and uncertainties. The administration likes to pretend that Congress is not prepared to support a more forceful approach because of its lack of support for military action to enforce President Obama's red line in 2013. This is a myth. What many in Congress opposed was granting a reluctant president authority to conduct what Secretary of State John Kerry promised would be "unbelievably small" airstrikes in the absence of a broader strategy to achieve U.S. national interests in Syria. The U.S. needs that broader strategy now.

Any alternative approach must begin with grounding Mr. Assad's air power. It is a strategic advantage that enables the Assad regime to perpetuate the conflict through the wanton slaughter of innocent Syrians. The U.S. and its coalition partners must issue an ultimatum to Mr. Assad—stop flying or lose your aircraft—and be prepared to follow through. If Russia continues its indiscriminate bombing, we should make clear that we will take steps to hold its aircraft at greater risk. And we must create safe zones for Syrian civilians and do what is necessary to protect them against violations by Mr. Assad, Mr. Putin and extremist forces.

At the same time, we must provide more robust military assistance to the vetted Syrian opposition groups that are fighting the regime. The only way to isolate and target extremists on the battlefield is to make moderate groups more capable of fighting successfully on their own.

The Obama administration's approach to Syria has failed miserably. Now is the time for a new strategy—including the necessary military component—that can achieve this more realistic objective. This will undoubtedly entail greater costs. But the alternative is far from cost-free: It is the continuation, for years and years, of terror, tragedy, slaughter, refugees, and a war in the heart of the Middle East that will continue to threaten the U.S. and destabilize the world.