Klitschko vs. Joshua in jeopardy over WBA world title 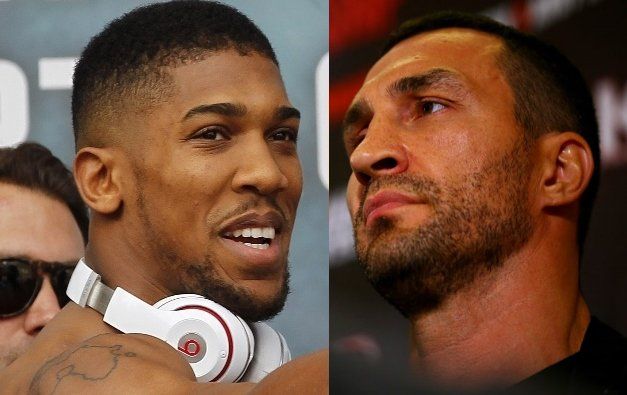 The fight has been penciled in for the Manchester Arena on December 10. Sky Sports Box Office and Showtime are ready to televise the contest, according to BoxingScene.com.

But Klitschko wants the vacant WBA world title to be at stake in the fight. Tyson Fury vacated the title (along with the WBO/IBO) last week. Both Klitschko and Joshua have submitted paperwork to have the WBA title at stake in their match - and the sanctioning body has yet to respond.

Read alsoTyson Fury vacates WBO, WBA heavyweight titles to deal with 'recovery' – BBCThe situation has Hearn worried to the point where he admits that he's considering "alternative options" for Joshua.

"The deal is there but we are awaiting sanctioning from the WBA," Hearn exclusively told Sky Sports. "Both teams have written to the WBA to request sanctioning of our fight, but Volodymyr wants the WBA belt to be on the line so until that is approved we cannot move forward.

"We expect news in the next few days, but in the mean time I believe both sides will look at alternative options for December 10 while we hope to get the news we need to make the fight happen."

The fight first got rolling when Fury withdrew from his October 29th rematch with Klitschko. It was Fury's second withdrawal, and because of that Klitschko has been inactive since losing to Fury in a massive upset last November. After his second withdrawal, it was revealed that Fury was dealing with a mental illness and he tested positive, on two occasions, for cocaine. It wasn't long before he made a decision to vacate his belts - and then the British Boxing Board of Control suspended his boxing license for using illegal recreational drugs.

Joshua was originally scheduled to fight on November 26, at the same Manchester venue, but his return was moved to December 10 to allow Hearn and Klitschko's handlers an adequate amount of time to promote the fight.