Bloomberg: The Pessimist's Guide to 2017 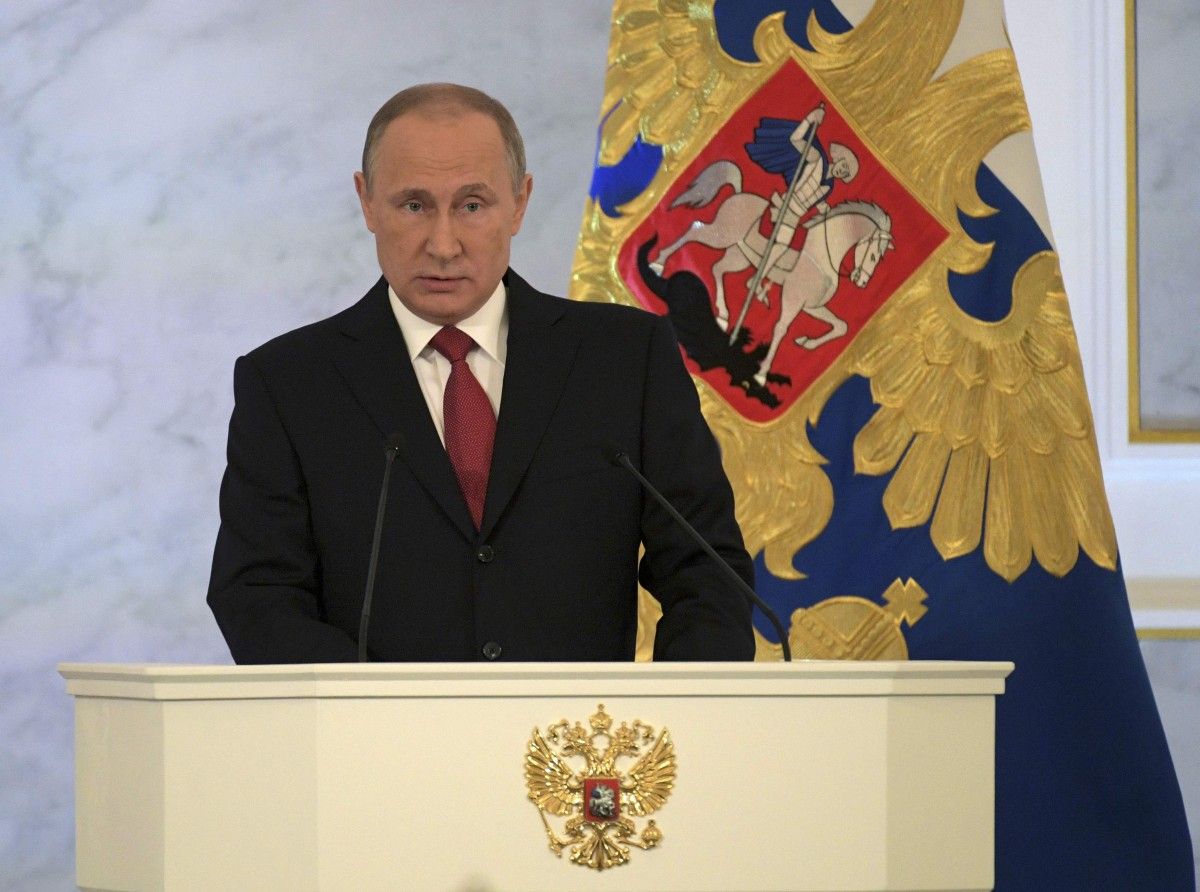 "Donald Trump and Brexit shocked most of the world in 2016. But not readers of last year's Bloomberg Pessimist's Guide, which warned that the unthinkable could happen in both cases. Now the authors are turning their attention to 2017," John Fraher, Flavia Krause-Jackson and Mira Rojanasakul wrote in an article titled "The Pessimist's Guide to 2017," published by Bloomberg on December 5.

"From social breakdown in the U.S. to a nuclear crisis in North Korea to the defeat of Angela Merkel in Germany, the potential for chaos is just as great. These aren't predictions. But they show what your social-media news feed could look like if things go wrong," the article reads.

Trump's popularity soars in his first weeks in office as an energized Republican Congress passes a huge fiscal stimulus.

California emerges as the center of opposition to Trump, with some branding the movement "Calexit." The state defies Trump's rollback of environmental regulations. Billionaires Elon Musk and Sheryl Sandberg emerge to lead a progressive alliance against Trump in 2020.

All of this causes deep divides in Trump's ruling coalition. The GOP splits in Congress and Trump's team of White House mavericks are soon at each other's throats.

Shares in banks, steel and security firms surge in the first months of the Trump era. But then the Trump stock boom fizzles early and Treasuries soar. Shares in Google, Facebook and Apple take a hit as the faceoff between Trump and Californian billionaires worsens.

Joel L. Naroff, Naroff Economic Advisors, says: "Let's say everything gets passed. All that fiscal stimulus in an economy that’s already at full employment causes massive labor shortages, wage pressures that build sharply, forcing the Fed to deal with rising inflation, crashing the housing market and sending banks and the financial system into another tailspin."

Trump's isolationism and Vladimir Putin's aggression force Germany's Merkel into a difficult choice: to lead a military buildup in Europe against Russia. Or heed Trump's advice and strike a grand bargain with Putin to agree on spheres of influence in Eastern Europe.

Read also"Friends of Russia" in EP: Resolution on Russian propaganda reveals Kremlin supporters (infographics)Putin calls off his hackers and rogue fighter jets and agrees to stop interfering in the affairs of the U.S. and the European Union.

In return, Merkel and Trump recognize Russia's sway over Ukraine, Belarus and Syria. For Putin, Russia's prestige is finally restored 26 years after the collapse of the Soviet Union and he starts to talk openly about his retirement after one final presidential term.

The ruble rises as Russia comes back into the global fold. Defense stocks lose some of their luster amid disappointment that the EU doesn't arm up.

Slamming what he calls #CrookedChina, Trump tweets at 3:17 a.m. on the morning of his inauguration that he's planning to label the country a currency manipulator and slap "huge" tariffs on incoming imports.

By the time he's on his way to the Capitol, China has already started to retaliate by devaluing the yuan, canceling orders for Boeing jets and blocking iPhone sales.

Read alsoDonald Trump risks China rift with Taiwan call - FTAs the year goes on, Chinese officials, distracted by political jockeying ahead of November's reshuffle of the Communist Party's Standing Committee, split over how to revive an already debt-laden economy.

China falls into its deepest recession of the modern era.

Trump spends his first months in office calling into question U.S. commitments around the world. First, he suspends U.S membership in NATO, then in the United Nations. America's traditional foes thrive in the vacuum.

Islamic State, exploiting U.S. disengagement from the world, runs its drug operations out of Afghanistan and radicalizes Central Asia.

Worried about living outside the American nuclear umbrella, Saudi Arabia and Japan start developing their own capability.

Finally, the world is shocked when North Korea proves it can fit a miniaturized nuclear device on a missile capable of hitting the U.S. West Coast.

Trump's entire Asian strategy is thrown into disarray, forcing him to kowtow to China and beg for their help in reining in their rogue neighbor.

Shares in defense companies surge and east Asian stocks plunge amid a broader flight to safer assets such as Treasury bonds and gold.

Legitimized by Trump's victory, voters across Europe, starting with the Netherlands, usher in populist leaders who want to tighten borders, tear up free-trade agreements and even break away from the euro and the EU itself.

In Italy, comedian Beppe Grillo's Five Star Movement comes to power in snap elections and immediately calls a referendum to reinstate the lira.

Germany's Merkel loses the election. In the U.K., Theresa May is ousted by a hard-liner after Brexit talks go awry.

In Eastern Europe, a newly right-wing Czech Republic cozies up to Russia and calls a plebiscite on NATO membership. Under the shadow of Frexit, the passport-free Schengen Area is dissolved.

Greece blows up again and this time there is no bailout.

The euro goes into a tailspin as the political support that saw the currency through the 2009-2012 debt crisis starts to unravel.

6. The Internet of (Bad) Things

Amazon, Apple and Google reveal widespread government wiretaps of the passive listening software on smartphones and Echo-like connected home devices, while Wikileaks turns on Trump with a series of embarrassing leaks.

While no foreign powers will claim responsibility, evidence points to possible Russian or Chinese involvement, precipitating open cyber warfare among the superpowers.

Trump backtracks on the Obama-sponsored rapprochement between Cuba and the U.S., nipping in the bud a chance for the Socialist island to throw its economy a lifeline.

Read alsoFormer Cuban leader Fidel Castro dies aged 90As money dwindles—at a time when regional allies Brazil and Venezuela are reducing financial assistance—Cubans turn their attention to the two other major players still interested in the region: China and Russia.

Given their historical ties, President Raul Castro lets the Russians reopen an intelligence base in Havana.

A Russian spy agency just 90 miles away from Miami turns out to be a bit too close even for Trump, straining his budding relationship with Putin and bringing back memories of the 1962 Cuban Missile Crisis.

Trump pulls out of NAFTA, boosts tariffs on Mexican exports and heavily taxes remittances from workers in the U.S. to pay for the infamous border wall.

Mexico plunges into a deep recession and loses its cherished investment-grade rating.

Mass deportations from the U.S. force the desperately unemployed arrivals into drug trafficking.

As hostility toward gringos reaches fever pitch, a populist from the left—Andres Manuel López Obrador—emerges as front-runner for the presidency in 2018 on a platform that includes the revision of oil exploration contracts previously awarded to private companies. Nationalization beckons.

The peso continues on its downward spiral, fueling inflation and pushing borrowing costs higher. Led by a plunge in Pemex paper, Mexican corporate bonds are sold off, bringing back fears of a wave of debt restructurings.

At the same time, the delicate balance of power in the region tilts toward arch-enemy Iran, as Shiite sympathizers make gains in Iraq and Syria.

A Saudi palace coup brings to power a new royal family member, who pushes the deputy crown prince aside and shelves reforms.

With Trump deciding the Middle East is just not America's problem anymore, tensions between Saudi Arabia and Iran lead to direct armed confrontation.

Massive disruption hits oil and gas exports through the Strait of Hormuz.

Oil spikes, investors flee and plans to privatize national oil company Saudi Aramco are derailed. After burning through its reserves, Saudi Arabia devalues its currency, forcing the rest of the region to follow suit.