Several buses en route to evacuate ill and injured people from the besieged Syrian villages of al-Foua and Kefraya were attacked and burned on Sunday, the Syrian Observatory for Human Rights and Syrian state television said, according to Reuters. 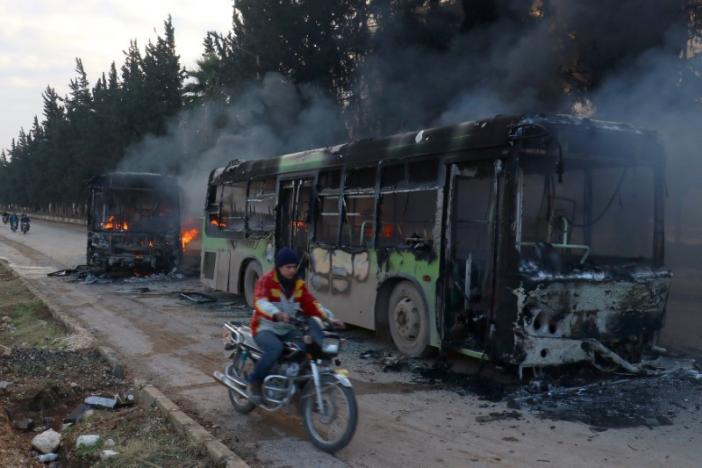 Some buses, as well as Red Crescent vehicles, reached the entrance to the villages in Idlib province, which are besieged by insurgents, Reuters reported.

The coalition of forces fighting for the government of President Bashar al-Assad are demanding people to be allowed to leave the two villages in exchange for allowing evacuations of rebels and civilians from east Aleppo.

Evacuations from the city resumed on Sunday afternoon.

Read alsoAleppo evacuation halted as blasts heard – ReutersThe Free Syrian Army, a nationalist opposition alliance, said the attack on the buses was carried out by individuals not affiliated to it. Obstructing the evacuation process in this way was a "reckless" act which put the lives of thousands of trapped people in danger, it said in a statement.

Pro-Damascus Mayadeen television said the group formerly known as the Nusra Front was behind the attack. Local residents told Reuters this was not the case.

Read alsoRally held outside Russia embassy in Kyiv over Aleppo massacreThe group had previously said it had not agreed to the evacuation of the two villages, most of whose residents are Shi'ite Muslims.

Videos broadcast on social media showed men with guns cheering and shouting "God is great" as the buses burned.

Rebel officials said an angry crowd of people, possibly alongside pro-government "operatives", carried out the attack.