The United States is committed to the security of the Baltic region and NATO, Republican senator John McCain said in the Estonian capital on Tuesday, during a visit seen as a bid to soothe concerns over the policy of President-elect Donald Trump, according to Reuters. 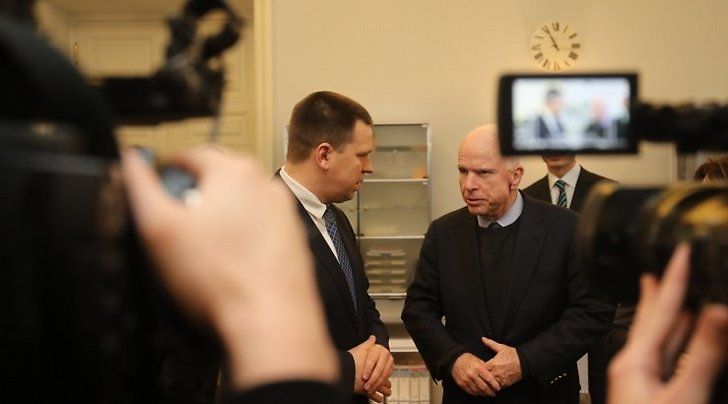 Trump unnerved many in Estonia, Lithuania and Latvia by saying on the campaign trail he would consider a country's contributions to the NATO alliance before coming to its aid, as reported by Reuters.

Russian military involvement in Ukraine and Georgia has stoked fears in the Baltics their former Soviet master might eventually try something similar there.

"I think the presence of the American troops here in Estonia is a signal that we believe in what Ronald Reagan believed, and that is peace through strength," McCain told reporters in the Estonian capital.

"And the best way to prevent Russian misbehavior by having a credible, strong military and a strong NATO alliance."

The U.S. stationed about 150 troops in each of the three Baltic countries and Poland in April 2014.

On a three-day visit to the Baltics with fellow Republican senator Lindsey Graham, McCain said he did not expect the U.S. to remove sanctions against Russia, imposed after its annexation of Crimea in 2014.

"That is certainly not the case today as I know it", he said.

Read alsoU.S. Senators Graham, McCain to visit Ukraine late DecHe also said that the United States, regardless of who was its president, would have "a strong and significant response" as long as Putin continued "to occupy Crimea and has invaded eastern Ukraine and continues to threaten other nations in the region."

Russia's annexation of the Crimea in 2014 has fueled concerns in the Baltic states, all NATO members, that Moscow may want to reassert control across the whole region.

"There is fear in the Baltics about the incoming Trump administration's relationship with Russia, that sanctions against Russia will be weakened or called off, and not strengthened as the Congress would want," Zygimantas Pavilionis, Lithuania's former ambassador to the U.S. told Reuters.

He said Russia had gained confidence after the muted response to its actions in Georgia.

"If its actions in Ukraine are also forgiven, its next step is an open question," he said.

McCain and Graham, who travel to Latvia on Wednesday and Lithuania on Thursday have expressed alarm at Trump's attitude towards Russia.

They want Trump to take a tough line over what they termed Russia's "military land grab" in Ukraine and have also called for a bipartisan panel to investigate cyber attacks against the United States, including Russia's alleged efforts to influence the U.S. presidential election.

"There is no doubt that the Russians were hacking, but there is doubt whether it had any effect on the outcome of the election," McCain said.

"There is no evidence right now that indeed the Russian cyber attacks and the leaking of the information had any tangible effect on the outcome of the American election."