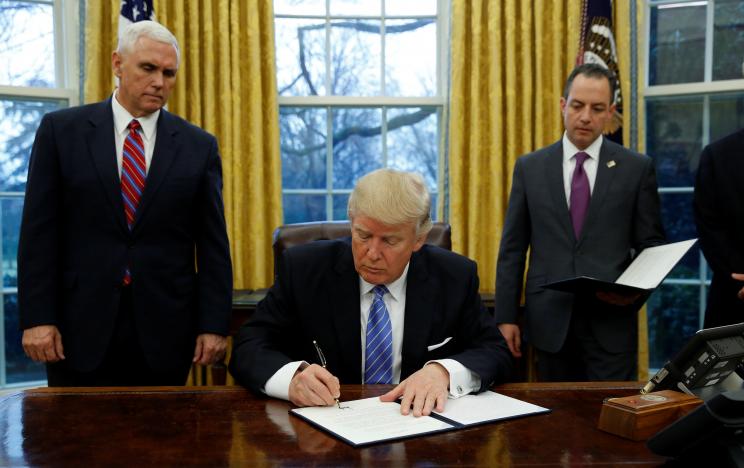 Oil producers in Canada and North Dakota are expected to benefit from a quicker route for crude oil to U.S. Gulf Coast refiners. But going ahead with the pipelines would mark a bitter defeat for Native American tribes and climate activists, who successfully blocked the projects earlier and vowed to fight the decisions through legal action, Reuters wrote.

Trump campaigned on promises to increase domestic energy production. Before taking office he said the Dakota pipeline should be completed and that he would revive the C$8 billion ($6.1 billion) Keystone XL project, which was rejected in 2015 by then-President Barack Obama.

Even though Canada is already the biggest source of U.S. crude imports, boosting the flow from a close ally is seen in Washington as a way to improve U.S. energy security.

"It goes to show we as a nation build infrastructure that is part of a comprehensive energy plan to make our energy secure," Republican Senator John Hoeven of North Dakota told Reuters.

TransCanada Corp said it would resubmit an application for a permit for Keystone XL after Trump signed an order saying the company could re-apply. The application will be reviewed by the U.S. State Department, which has 60 days to reach a decision.

Read alsoNorth Dakota crude oil worth less than nothing – BloombergThe orders look set to undo victories won by protesters in North Dakota against Energy Transfer Partners, which has nearly completed construction of the Dakota line. Despite the advanced phase of the project, the Obama administration in December denied the company a permit to tunnel under the Missouri River.

Protesters rallied for months against plans to route the $3.8 billion pipeline beneath a lake near the Standing Rock Sioux reservation, saying it threatened water resources and sacred Native American sites.

At one point, nearly 10,000 people had flocked to federal land in North Dakota, including 4,000 veterans after protests turned violent at times. The main protest camp has dwindled to several hundred after the Standing Rock tribe asked activists to leave when the U.S. Army Corps of Engineers denied the easement.

In a statement on Tuesday, the Standing Rock Sioux said they would fight the orders.

"Americans know this pipeline was unfairly rerouted towards our nation and without our consent. The existing pipeline route risks infringing on our treaty rights, contaminating our water and the water of 17 million Americans downstream," said Dave Archambault II, chairman of the Standing Rock tribe.