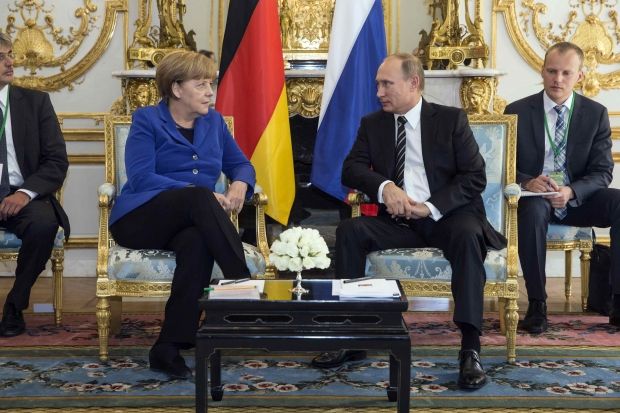 There is no immediate prospect that Western sanctions imposed on Moscow over the Ukraine crisis will be lifted, but Merkel's visit sends a signal that Germany, the European Union's foremost power, is willing to engage with the Kremlin, Reuters said.

The agenda of Merkel's visit has yet to be made public, but talks are likely to focus on Ukraine, EU sanctions, trade ties and German concerns that Russia may try to meddle in a parliamentary election in September.

Read alsoAP: Merkel formally nominated for German election runGermany is also president of the G20 group of leading nations this year and Merkel will need to meet with key members ahead of an upcoming summit.

"Give my best wishes to the federal chancellor," Putin told Horst Seehofer, Bavaria's prime minister, who was in Moscow for talks on Thursday. "We are waiting for her to visit on May 2." Seehofer confirmed Merkel was planning to visit that day.

Read alsoArms for Ukraine, sanctions against Russia may help U.S. block Putin in Ukraine – opinionPutin and Merkel have met on numerous occasions since the Ukraine crisis, including visits to each other's capitals. But those meetings were on the sidelines of multilateral gatherings. In terms of diplomatic protocol, a bilateral visit carries more cachet.

The last bilateral visit was in June 2013, when Merkel came to Russia's second city of St Petersburg at Putin's invitation, according to the Kremlin website and Merkel's official site.

Merkel and Putin initially had warm relations but things soured after the German chancellor led the EU condemnation of Russia's actions in Ukraine.

She has said EU sanctions, imposed over the annexation of Crimea and Russian support for separatists in eastern Ukraine, must remain in force until Russia changes its behavior.

Merkel has played a pivotal role in keeping European Union states united behind the sanctions but she has come under pressure from industrial lobbies in Germany that say businesses have suffered as a result.