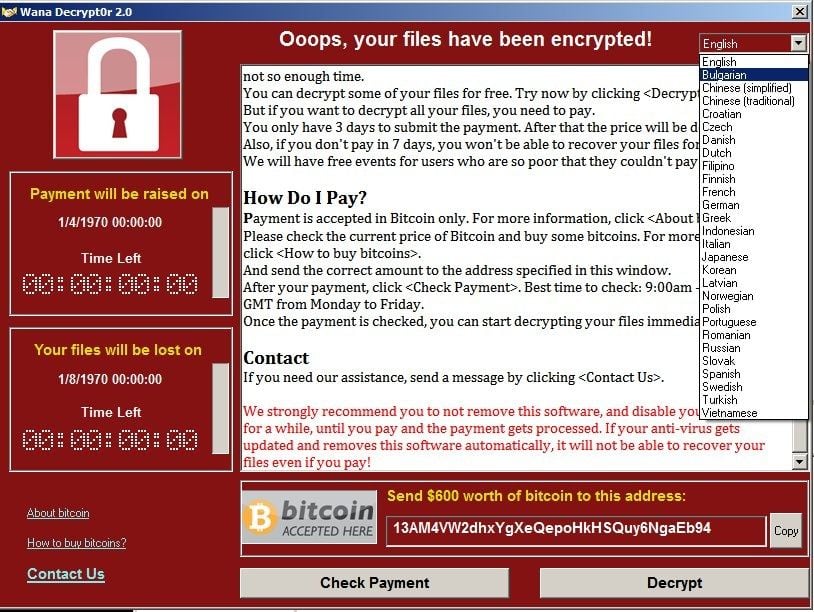 As the ransomware wreaked havoc worldwide, affecting big companies and government agencies worldwide, a UK cybersecurity researcher tweeting as @malwaretechblog, with the help of Darien Huss from security firm Proofpoint, found and activated a “kill switch” in the malicious software, according to The Guardian.

The switch was hardcoded into the malware in case the creator wanted to stop it spreading. This involved a very long nonsensical domain name that the malware makes a request to – just as if it was looking up any website – and if the request comes back and shows that the domain is live, the kill switch takes effect and the malware stops spreading.

Read alsoBBC: Ransomware infections reported worldwide“I saw it wasn’t registered and thought, ‘I think I’ll have that’,” he is reported as saying. The purchase cost him $10.69. Immediately, the domain name was registering thousands of connections every second.

I will confess that I was unaware registering the domain would stop the malware until after i registered it, so initially it was accidental.

The time that @malwaretechblog registered the domain was too late to help Europe and Asia, where many organizations were affected. But it gave people in the US more time to develop immunity to the attack by patching their systems before they were infected, said Kalember.

The kill switch won’t help anyone whose computer is already infected with the ransomware, and and it’s possible that there are other variances of the malware with different kill switches that will continue to spread.

Ransomware is a type of malware that encrypts a user’s data, then demands payment in exchange for unlocking the data. This attack was caused by a bug called “WanaCrypt0r 2.0” or WannaCry, that exploits a vulnerability in Windows. Microsoft released a patch (a software update that fixes the problem) for the flaw in March, but computers that have not installed the security update remain vulnerable.

The ransomware demands users pay $300 worth of cryptocurrency Bitcoin to retrieve their files, though it warns that the “payment will be raised” after a certain amount of time. Translations of the ransom message in 28 languages are included. The malware spreads through email.

If you see a spelling error on our site, select it and press Ctrl+Enter
Tags:cyberattackransomwareWannaCry