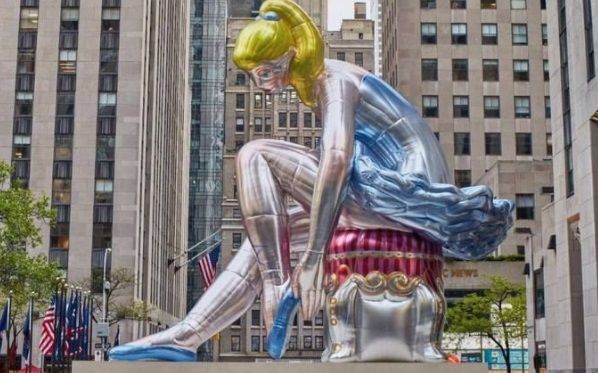 The original publicity material for the piece, Seated Ballerina, said the work was inspired by a porcelain figure "found at a Russian factory at the turn of the 20th century", The Telegraph wrote.

But observers soon noticed that the inflatable sculpture bore a striking resemblance to a piece by well-known Ukrainian sculptor Oksana Zhnikrup, who was born in 1931 and worked for the Kyiv Experimental Art Ceramics Factory.

Read alsoJohnny Depp supports Oleh Sentsov illegally imprisoned in RussiaAfter he was approached for comment on the similarities by Artdependence magazine, a spokeswoman for Mr. Koon's studio acknowledged that the artist knew about the origin of the work.

"We are aware of Oksana Zhnikrup's work and have a license to use it for Mr. Koons's work," said the spokeswoman.

Mr. Koons, 62, is known for his kitsch, large-scale reproductions of everyday items, including a series reproducing inflatable animals.

If you see a spelling error on our site, select it and press Ctrl+Enter
Tags:Ukraineart