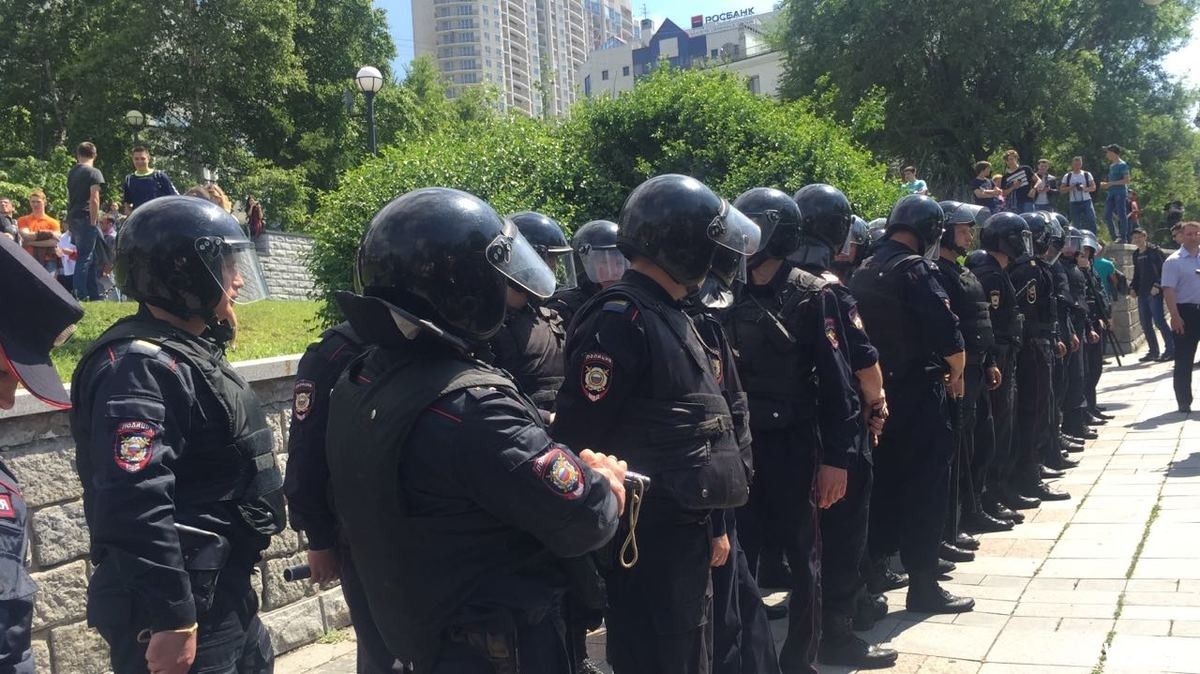 At least four people were detained on June 12 in the city of Blagoveshchensk, including the organizer of the unauthorized protests there, according to OVD-Info, a site that tracks protests and police actions in Russia, RFE/RL wrote.

Local media reports said riot police scuffled with demonstrators as a few hundred people protested in Vladivostok, which is seven hours ahead of Moscow, and detained an unspecified number of people.

Rallies in the Far East and Siberia came ahead of a planned march and protest at 11:00 GMT in Moscow, which Navalny plans to hold on a central street in defiance of the authorities.

City authorities granted permission to stage the rally outside the city center, but Navalny said in a YouTube video late on June 11 that he had moved it to Tverskaya Street, a main thoroughfare that leads to the Kremlin.

Navalny announced the change less than 24 hours before the planned anticorruption protests across the country on the Russia Day holiday. He said the authorities pressured providers of audio, video, and stage equipment not to work with the organizers.

After Navalny announced the switch, the Moscow prosecutor's office warned that "any attempts to hold an unauthorized event on Tversakaya Street" would be illegal and "law enforcement organs will be forced to take all necessary measures" to keep order.

Demonstrations were being held or planned in more than 200 cities and towns to protest what Navalny says is a system of corruption and cronyism that President Vladimir Putin presides over.

Navalny, a Kremlin foe who is seeking to run for president next year, is looking to build on momentum picked up during nationwide protests in March, which drew unexpectedly large crowds and ended with more than 1,000 people detained in Moscow alone.

Read alsoNavalny promises withdrawal of Russian troops from Donbas, fair referendum in CrimeaIn his June 11 YouTube video, Navalny accused authorities of making it impossible for demonstrators to hold the rally in Moscow by pressuring businesses that organizers were seeking to rent equipment from.

The video included an alleged recording of a telephone conversation with a contractor who said his bosses told him it was "forbidden" to provide services to Navalny's group.

Navalny said protesters had a constitutional right to gather to express their political opinions and that Tverskaya Street would be an ideal location because it will be turned into a pedestrian zone for the Russia Day celebrations.

"The law is completely on our side," he said.

Navalny is trying to get on the ballot for the March 2018 presidential election, in which Putin is widely expected to seek and secure a fourth term as president.

Navalny has been convicted three times in financial-crimes trials that he calls Kremlin-orchestrated retribution for his activism, though he has been handed suspended sentences rather than actual prison time.

Russian authorities have suggested that he could be barred from the presidential ballot due to his criminal record. But his backers say the rules are unclear, and Russian officials have not stated clearly whether he will be allowed to run.

A day before the planned June 12 protests, a video produced by Navalny and his supporters accusing Russian Prime Minister Dmitry Medvedev of corruption was published on two government websites.

The video, which played a central role in galvanizing protesters for the March 26 demonstrations, was published briefly on the websites of the regional prosecutor's office in the central city of Yaroslavl and the St. Petersburg regional administration.

Yaroslavl prosecutors said they suspected their website was hacked.

If you see a spelling error on our site, select it and press Ctrl+Enter
Tags:RussiaprotestsNavalny