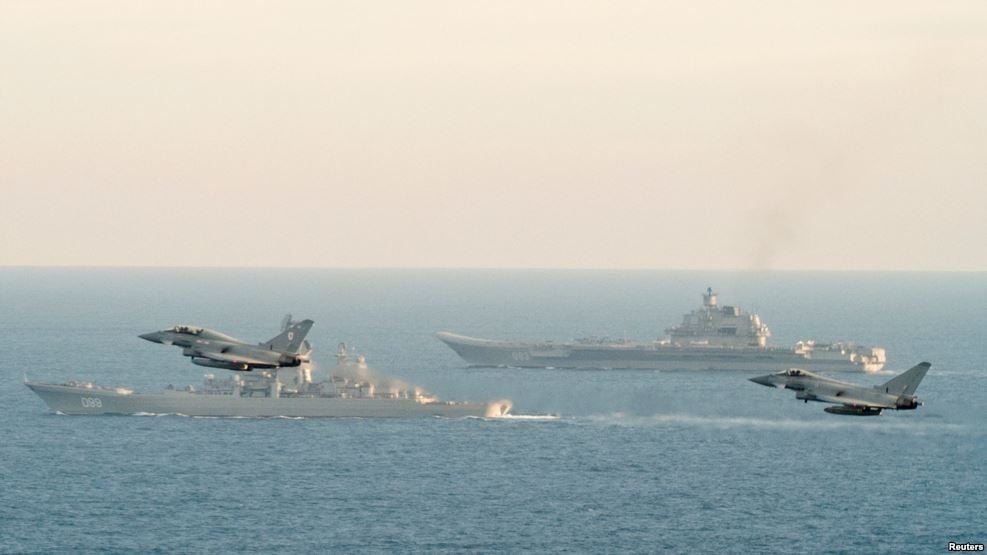 Russia's aircraft carrier, the Admiral Kuznetsov, is back in Murmansk for costly repairs after supporting Russian forces in Syria, BI reported.

Though the ships are far apart geographically, they are head-to-head in the minds both countries' military leaders, who have exchanged impassioned criticisms of each other's fleets this week.

UK navy officials expect Russian forces to spy on the 184-foot high, 920-foot-long HMS Queen Elizabeth — which weighs 65,000 tons and cost $3.8 billion — during its sea trials in the North Sea this week.

"They will try and get more information about the carrier, but we have ways and means, which I'm certainly not going into, of making sure the carrier is fully protected," UK Defense Secretary Michael Fallon said.

Royal navy officials have said a frigate or destroyer will escort the Elizabeth and that shore-based helicopters will look for Russian submarines spying on it. Fallon also took the opportunity to mock Russian naval capacity.

"It's really routine for the Russians to collect intelligence on our ships," Fallon told The Telegraph. "We will take every precaution to make sure that they don't get too close, but I think they will be admiring her."

Fallon, who boasted the UK was building two powerful aircraft carriers at a time when only three countries in the world were constructing them, also ribbed the Kuznetsov specifically.

"When you saw that old, dilapidated Kuznetsov sailing through the Channel, a few months ago, I think the Russians will look at this ship with a little bit of envy," he told The Telegraph.

The 55,000-ton Kuznetsov, which was commissioned in 1991, frequently faces technical and mechanical problems. It sails with a tugboat in case of breakdown.

In spite of those issues, the Russian military bristled at Fallon's jibes.

Read alsoRussian Kuznetsov carrier reportedly sees failed landing of Su-33 - media"Unlike the Admiral Kuznetsov, which is equipped with anti-aircraft and anti-submarine missiles and especially Granit missiles to hit ships, the British aircraft carrier is nothing but a big, convenient target in the sea," he said in a statement.

"For that reason, it is in the interests of the British royal navy not to show off the 'beauty' of its aircraft carrier on the high seas any closer than a few hundred miles to its Russian 'distant relative,'" Konashenkov added.

This exchange comes after Fallon irked Russia in January, when he called the massive Russian cruiser "a ship of shame" as it passed close to the English coast on its way back from bombing raids in Syria.

Relations between Russia and Europe and the U.S. have become increasingly chilly.

Countries throughout Europe have warned of increased Russian military and intelligence-gathering activity, while members of the NATO military alliance have boosted their military spending largely in response to aggressive Russian action abroad, rather than exhortations from President Donald Trump.

Moscow made a cut to its defense spending this year (though it remains higher than recent years), but its military remains active.

Encounters between Russian aircraft and NATO and U.S. planes and ships have become frequent, and Russian naval activity around Europe now reportedly exceeds what was seen under the Soviet Union.

If you see a spelling error on our site, select it and press Ctrl+Enter
Tags:RussiaBritainEuropeNATO