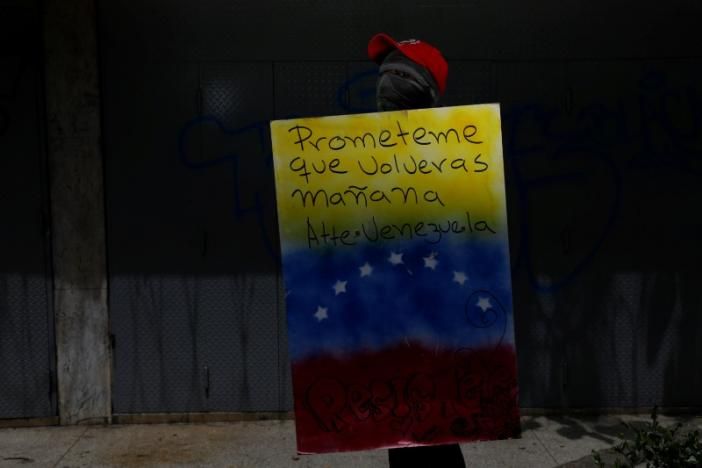 Foes of Venezuelan socialist President Nicolas Maduro are holding public showings of Netflix's "Winter on Fire" documentary about the three-month standoff in Ukraine that led to 100 deaths and the exit of then-president Viktor Yanukovych, Reuters wrote.

The young Venezuelans make their shields from satellite TV dishes, drain covers, barrels or any other scraps of wood and metal they can find. Some supporters also make and donate shields.

The protesters use the shields to form walls, or even beat on them in unison, as Roman soldiers and Norsemen used to do going into battle. Fellow demonstrators cheer as the self-styled "Resistance" members link arms to walk to the front lines and face off with National Guard troops and police.

"The shields don't stop bullets, but they do protect us from tear gas, rubber bullets and stones," said 20-year-old law student Brian Suarez, wearing a gas mask and carrying a shield depicting Maduro in the sights of a rifle target.

Other shields carry quotes and images of Venezuela's constitution, paintings and religious symbols, depictions of the faces of slain protesters, or slogans saying "SOS!", "No More Dictatorship!" or "Murderer, Maduro!"

While the protesters say they are fighting against tyranny in the South American oil producer, Maduro accuses them of seeking a violent coup with U.S. support.

Manuel Melo said he was on the front line of protests, hurling stones and protecting other marchers with his blue plastic shield, until one day he was caught by a water cannon. The 20-year-old graphic design student lost his kidney from the impact.

Nevertheless, he wants to go back.

"It's an important role being a shield-bearer because you know that everything they throw goes straight at you," he said while recovering from his home in Caracas. "I'm not out there because I like it, but for the common good."

"Winter on Fire," by Russian director Evgeny Afineevsky, shows tens of thousands of Ukrainian protesters braving snow and baton attacks from riot police to barricade themselves in Maidan Square.

It has been discreetly shown around Venezuela, including at bookshops, a university, a public square and an arts cinema.

"Hearing a Ukrainian and seeing the tears in their eyes, you ask yourself: 'Hold on, am I in Ukraine or in Cafetal?'" said university professor Carlos Delgado, referring to an upper-class part of Caracas that has vigorously supported the protests.

Delgado, 48, recently participated in a screening and forum about "Winter on Fire" at Venezuela's Catholic University, where opposition to Maduro is also strong.

Many have also spread the word on social media.

In both countries, protesters have opposed presidents they consider repressive, and the clashes turned increasingly violent. But differences abound, too.

While Ukraine's protesters endured freezing conditions day and night, Venezuela's thin out quickly when rain starts, and they go home in the evening and enjoy balmy Caribbean weather.

The Venezuelans point out that criminal gangs make the streets dangerous at night. And with their economy in meltdown, they are often short of medicine, food and other needs, whereas the Ukrainians had a good supply line.

Hans Wuerich, who became famous for stripping in front of an armored car with a Bible in Caracas, said "Winter on Fire" made him think Venezuela's Resistance needed to escalate tactics.

"It's time to take the protests to another level," the 27-year-old reporter said in Caracas' Altamira Square, a focus of the demonstrations. "But we need to be organized if we're going to take the streets day and night, if it's really about a point of no return."

If you see a spelling error on our site, select it and press Ctrl+Enter
Tags:UkraineprotestsVenezuela