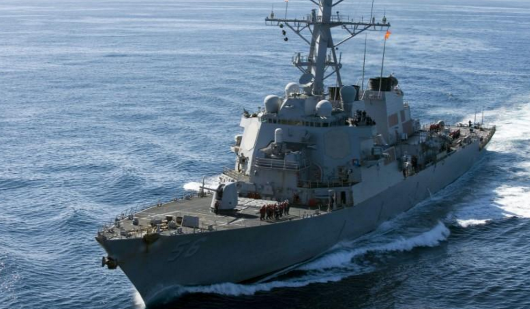 The operation came as President Donald Trump's administration seeks Chinese cooperation in dealing with North Korea's missile and nuclear programs and could complicate efforts to secure a common stance, according to Reuters.

The officials, speaking on condition of anonymity, said the USS John S. McCain traveled close to Mischief Reef in the Spratly Islands, among a string of islets, reefs and shoals. China has territorial disputes with its neighbors over the area.

It was the third "freedom of navigation operation" during Trump's presidency.

Thursday's operation, first reported by Reuters, was the latest attempt to counter what Washington sees as Beijing's efforts to limit freedom of navigation in the strategic waters, and comes as Trump is seeking China's cooperation to rein in North Korea.

"China is resolutely opposed to this kind of show of force and pushing of regional militarization by the U.S. that may easily cause an unexpected incident at sea or in the air," it said in a statement.

If you see a spelling error on our site, select it and press Ctrl+Enter
Tags:USAChinafreedomofnavigation