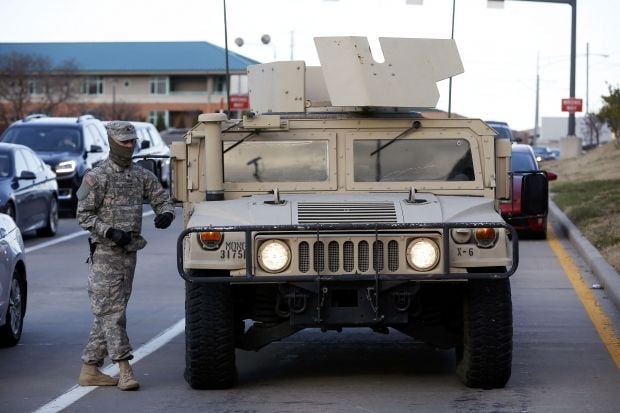 Trump's order would fully restore the program under which "assets that would otherwise be scrapped can be repurposed to help state, local, and tribal law enforcement better protect public safety and reduce crime," according to the documents.

Read alsoTrump to dispatch another 4,000 troops to AfghanistanNational police organizations have long been pushing Trump to hold his promise to once again make the equipment available to local and state police departments, many of which see it as needed to ensure officers aren't put in danger when responding to active shooter calls and terrorist attacks. An armored vehicle played a key role in the police response to the December 2015 mass shooting in San Bernardino, California.

In 1990, Congress authorized the Pentagon to give surplus equipment to police to help fight drugs, which then gave way to the fight against terrorism.

Groups across the political spectrum have expressed concern about the militarization of police, arguing that the equipment encourages and escalates confrontations with officers. President Barack Obama issued an executive order in 2015 that severely limited the surplus program, partly triggered by public outrage over the use of military gear when during protests in Ferguson, Missouri, following the shooting death of 18-year-old Michael Brown. Police responded in riot gear and deployed tear gas, dogs and armored vehicles. At times they also pointed assault rifles at protesters.

The Justice Department declined to comment on the expected move.

If you see a spelling error on our site, select it and press Ctrl+Enter
Tags:Trumppolicemilitaryequipment