It is absolutely essential, Nemets says, that South Korea, Japan, and the United States understand that everything that is now brewing in the region is what Moscow or more precisely Putin wants and not some rogue action by Kim Jong Un as many imagine, according to Euromaidan Press.

In the first of these articles, Nemets traces the history of Russian deliveries of missiles to North Korea in recent decades and the ways in which, apparently with some Russian assistance, Pyongyang has modified them, and then offers three main conclusions:

First of all, he says, “the development of the relatively primitive ballistic rocket Hwasong-10, one that corresponds to the level of Soviet rockets of the 1960s, from the beginning in 1992 until the series of tests in 2016, lasted 24 years.” What the North Koreans came up with was “a copy of the Soviet R-27 rocket.” 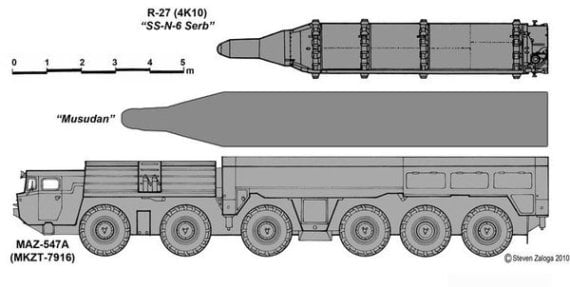 In some ways, it was not even as good, but it is important to note that the Hwasong-10 does not contain anything original,” a pattern that speaks to ‘the low scientific-technical potential of North Korea,” Nemets argues.

Second, he continues, “even this primitive result would have been impossible without very intensive Russian assistance, especially in 2015-2016. Why did Moscow feel compelled to provide this? Obviously not for money … Beyond any doubt, Moscow’s goal was the infliction of maximum harm on America.”

Read alsoRussia has all grounds, opportunities to supply engines for N.Korean missiles – Ukraine’s State Space AgencyAnd third, “the Hwasong-12 ballistic rocket, which was successfully tested in May 2017 and which has a range of more than 4000 kilometers and is capable of striking Guam and Alaska, is a much-improved version of the Hwasong-10, although it is based fundamentally on the very same technologies.”

Taken together, Nemets says, all this shows that “it is absolutely excluded that the weak industrial and scientific-technical system of North Korea could have created the Hwasong-12 in any case so quickly. If the Russian share in the Hwasong-10 was conditionally more than 80 percent, then in the case of the Hwasong-12, it approached 100 percent.”

In the second article, the Moscow analyst broadens his focus in order to suggest that the timing of North Korea’s actions, its missile launches and threats in particular, reflects less a Pyongyang calendar than a Moscow one intended by Putin to do maximum harm to the United States.

Nemets argues that the North Korean actions happened precisely as Russian-American relations were deteriorating, when Moscow’s expectations for a new deal with Donald Trump were replaced by a recognition that Washington was going to take a hard line against Russia for its interference in American elections and its aggression in Ukraine.

Read alsoRussia tried to conceal own participation in DPRK missile program by blaming Ukraine – TurchynovUkrainian officials have pointed to these links, but their words have been dismissed by many who believe that Kyiv is simply trying to blacken Russia’s reputation (and respond to Moscow’s claims that North Korea’s missiles came from Ukrainian factories) in order to win more support from the West, the Moscow analyst suggests.

But now a Russian official has implicitly made the connection between Moscow’s intentions and Pyongyang’s actions, Nemets says. Sergey Ryabkov, Russia’s representative to the United Nations, said that “the government of the Russian federation had been forced to react to the additional dislocation of (powerful) American THAAD complexes in South Korea and Japan that are capable of intercepting ballistic rockets.”

Read alsoN.Korea's ambitions have nothing to do with Kyiv and everything to do with Moscow - Atlantic CouncilPut in more normal language, the Moscow analyst says, this shows that “Moscow, infuriated by the fact that [North Korea’s] neighbors don’t approve [Pyongyang’s] nuclear and thermonuclear tests and the launch of rockets flying over the territory of Japan, was simply forced to do something.”