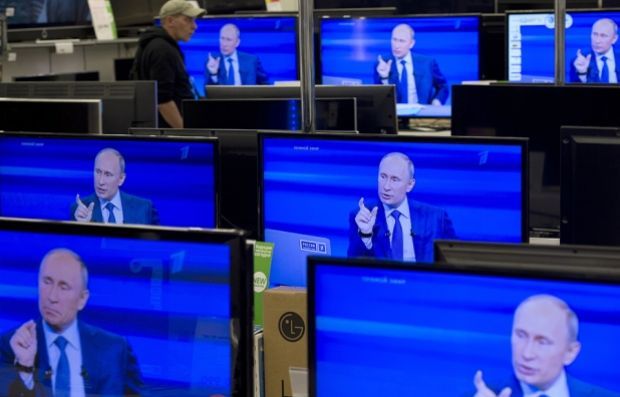 "Clearly, in the case of continued pressure, continued violation of the rights of our media to work unimpeded, I cannot rule out that actions will be taken in accordance with the principle of reciprocity," said Kremlin spokesman Dmitry Peskov on October 6, RFE/RL reported.

Peskov's comments were the latest in a series of threats and complaints from Russian officials.

U.S. law enforcement agencies have been looking into the operations of at least two Russian media outlets – the satellite TV channel RT and the news website Sputnik.

Read alsoRT under scrutiny in U.S. as foreign agent following reports of FBI probing SputnikFunded by the Russian government, RT was accused in a U.S. intelligence report of being one of the primary ways by which the Kremlin sought to influence last year’s U.S. presidential election.

Since then, calls have grown in Washington to force RT and Sputnik to register under a 79-year-old law initially aimed at restricting Nazi propaganda. During the Soviet era, some Russian-language media, including the newspaper Pravda and the wire agency TASS, registered as foreign agents.

In recent weeks, U.S. investigators have interviewed former employees of the two Russian outlets and some of its business contractors, inquiring about RT and Sputnik's editorial decision-making and management.

The Justice Department, which oversees FARA, has repeatedly refused to either confirm or deny making such an order.

Peskov echoed those comments to reporters in Moscow.

"We find it worrisome in principle that our mass media are not allowed to work normally," Peskov said on October 6. "This is unacceptable. It is a violation of the freedom of speech."

Simonyan also told a Russian legislative committee on October 5 that employees were leaving the U.S. operation, she said, out of fear of official pressure.

Andrei Klimov, a lawmaker in Russia’s upper house of parliament, said he and other lawmakers had appealed to unnamed government agencies asking for a "symmetrical response" to the reported pressure on RT.

"In Russia, there are around 40 American mass media operations. In my personal opinion, as an expert, the discussion ought to be in the first place about such structures as Radio Svoboda, which broadcasts in Russian," Klimov was quoted as telling the news website Fontanka.ru.

"This despite the fact that Russian media distribute freely in the United States. Still, millions of Russians follow our content. Apparently, the authorities recognize our impact, because they're creating growing obstacles to our work," he said.

"And yet, despite the pressures, we continue to operate...with a bureau in Moscow and correspondents across the country. We have been through hard times before. We trust we will endure even through the latest trough in U.S.-Russian relations," he said.

In its statement, Roskomnadzor did not say what breaches of Russian law CNN had allegedly made, but added it would continue "systematic monitoring" of foreign media outlets registered in Russia.

The regulator said it had given CNN until October 11 to rectify the violations.

If you see a spelling error on our site, select it and press Ctrl+Enter
Tags:RussiaPutinUSAKremlinRussiaToday