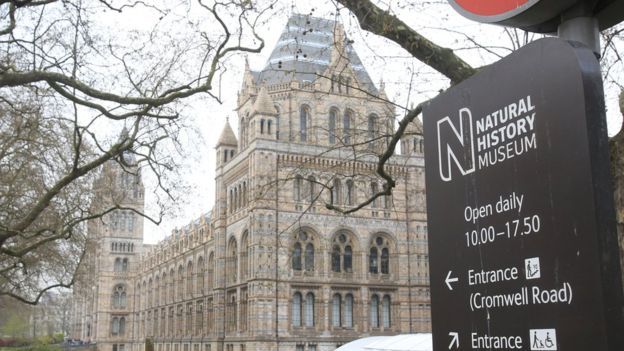 The Metropolitan Police said one person had been detained following the incident at 14:20 BST in Exhibition Road in South Kensington, the BBC reported.

Video footage that emerged on Twitter showed a man being restrained on the ground.

A BBC reporter at the scene said she had been told by police that the injuries were minor.

Police said inquiries are underway to establish the circumstances.

A Downing Street spokesman said the prime minister is "being kept up to date on events".

The current terror threat level in the UK is "severe" - the second highest - meaning an attack is highly likely.

"I could see a car diagonally across the road, looking like it was going into one of the boulders on the side of the road, and I could see a crowd of people around what was clearly one or two people on the pavement," she said.

Read alsoSeveral hurt in 'terrorist' incident on London underground train – mediaShe added there were now armed police at the scene.

"We have had lots of police coming onto the scene, helicopters above, and I can see an ambulance which is definitely having someone put in, but it isn't clear how bad that injury is."

Exhibition Road is an area popular with tourists as it is home to the Natural History Museum, the Science Museum and the Victoria and Albert Museum. All three museums have now been evacuated.

An eyewitness who was walking to the Science Museum said: "When waiting for the light, we heard what I thought was gunshots and saw a car drive over the pavement. We just ran. My friend dived on the floor and cut her hands.

The woman, who asked to remain anonymous, said: "When it calmed down we walked back to where we'd been and saw a gentleman on the floor being restrained by police."

Connor Honeyman, from Essex, who was in the queue for the museum, said: "We heard a horrible thudding noise and a car engine. Everyone started running and screaming inside.

"We ran in, everyone was following us, and then all the security guards ran out and they closed the main entrance. There was much confusion before the police got there."

If you see a spelling error on our site, select it and press Ctrl+Enter
Tags:Londoncrashcar