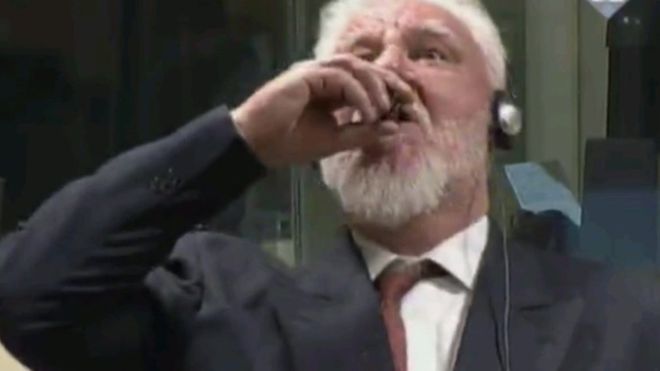 Slobodan Praljak was one of six former Bosnian Croat political and military leaders up before the court, according to BBC.

He was sentenced to 20 years' imprisonment in 2013 for crimes in East Mostar.

On hearing that his sentence had been upheld, he told the judge, "I have taken poison".

The six were appearing in court for the final appeals judgment to be handed down by the Yugoslav Tribunal.

Read alsoEx-Bosnian Serb commander Mladic convicted of genocide, gets life in prison – mediaPraljak stood and raised his hand to his mouth, tipped his head back and appeared to swallow a glass of something which, his lawyer told the court, was poison.

The judge immediately ordered the curtains be brought down and the proceedings suspended.

Before they were lowered the courtroom could be seen in a state of confusion, the BBC's Anna Holligan reports from The Hague.

Read alsoPoroshenko honors memory of Holodomor victims: Crimes against humanity not subject to statute of limitationsThe judge called for the glass Praljak had drunk from to be kept. Someone else was heard saying that an ambulance had been called.

If you see a spelling error on our site, select it and press Ctrl+Enter
Tags:Haguetribunalwarcrimespoison