Candidacy of Ambassador of Russia to Ukraine led to bewilderment 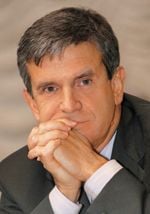 According to data ofKommersant newspaper, new Ambassador of Russia to Ukraine will be former Health and Social Development Minister of the RF Mikhail Zurabov.

At the same time, having known about the appointment of Mr. Zurabov, which is prepared, both Russian MFA and State Duma were out of balance. Deputy chairman of the Committee of State Duma on CIS issues Konstantin Zatulin said to Kommersant newspaper: “An appointment of Zurabov will be a mistake. Especially coming from interests of an affair. He is not political figure, he is a manager, and not popular”.