Saakashvilli to call Putin for duel? 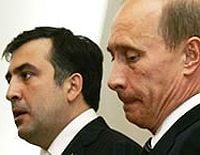 President of Georgia Mikhail Saakashvilli is going to carry out the judo duel “with his counterpart”. He said this in the evening of October 29 at the honour decoration awarding ceremony to members of Georgian combined team on judo, which won Coup of Europe on the team championship in Minsk.

Saakashvilli made his statement after the chief coach of the judo combined team of Georgia Shota Habareli thanked to the head of the state for his support of the team and in the name of the team presented to the President the kimono with the inscription at the back “Saakashvilli”, reports “Novosti-Georgia”.

For the answer the President noted that “I have one friend and counterpart, who enjoys this kind of sport”. “We have not bad results with him but I have to compete with him in judo. So I will come to you in the morning or in the evening in order to have trainings”, said Saakashvilli, speaking to judoists.

“It will be necessary some preparation in this sphere but I am sure that will reach the result in all”, said the President.

Saakashvilli did not say the name of rival, but from the words of the President it came out that he means President of the RF Vladimir Putin.