At Ukrainian lunch in Davos, guests drank champagne with fat

A Ukrainian lunch was held in Davos, where the World Economic Forum took place, on Friday. The action is carried out by Ukrainian tycoon Victor Pinchuk and his wife Olena Franchuk annually since the year 2005. Some 150 famous world politicians and businessmen took part in the lunch. They mostly discussed perspectives of investing into Ukraine. The businessmen almost unanimously asked for political stability and less talks about re-privatization. 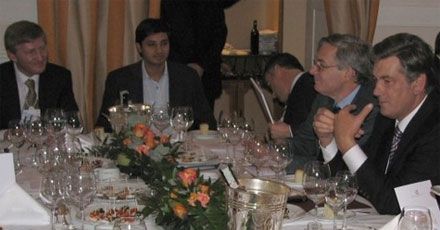 The measure took place in “Morosani” 4-star hotel. Contrary to the previous lunch, when the conference and lunch took place in separate halls, this time the guests could listen to speeches without interrupting their meal. The guests drank champagne, Ukrainian vodka, and orange juice. The most popular dishes were Ukrainian borshch and fat in different variations – smoked, salted, western fat, and lard. Meat, potato pancakes, and vareniks with cherry were also served.