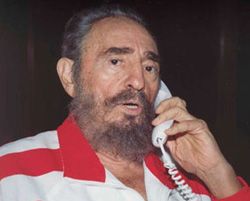 Fidel Castro refused to rule over the country.

F. Castro was in power in Cube for 49 years. A year and a half ago, in June 2006, because of the hard disease and operation on bowels F. Castro temporarily gave the ruling over the country to his brother Raul.