Prosecutors have already launched an investigation into the Ukrainian diplomats' note. 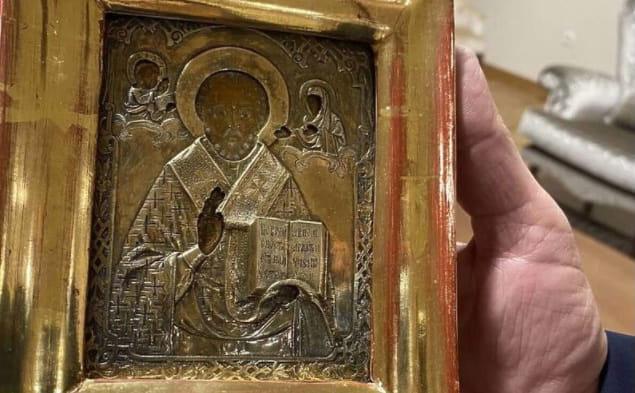 The Ukrainian Embassy in Bosnia and Herzegovina has demanded explanations from Sarajevo after Russia's top diplomat Sergei Lavrov during his visit received a 300-year-old Ukrainian icon, originally from Luhansk, as a present from local authorities.

That's according to Europeiska Pravda, referring to the Klix.ba news site.

It is alleged that one of the members of Bosnia and Herzegovina's Presidium, head of Republika Srpska Milorad Dodik, presented the icon to Lavrov on December 14 while Russia's foreign minister was on a working visit.

The local news site says the embassy requested information on the origin of the 300-year-old icon, which was allegedly originally discovered in Luhansk.

The Ukrainian side recalls that the city of Luhansk in eastern Ukraine has been temporarily occupied by Russia since 2014, and the lack of information about the icon, which is part of Ukraine's cultural heritage, would mean support for Russia's aggressive policy and military action against Ukraine.

Read alsoBosnian presidency members snub Russia's Lavrov over "disrespect"Journalists claim that there is a stamp on the back of the icon, proving its authenticity and that it belongs to Ukraine.

Following the original report, Dnevni avaz reported that the prosecutor's office of Bosnia and Herzegovina "received information from the head of the Ministry of Foreign Affairs Bisera Turković, saying that the ministry had got a note from the Ukrainian embassy. A case has been opened and will be investigated."

The Ministry of Foreign Affairs of Bosnia and Herzegovina also sent a letter to the State Agency for Investigation and Defense requesting a proper investigation into the allegations based on a note from the Ukrainian Embassy.

Zeljko Komsic, Bosnia's Croat member of the presidency, said Dodik needs to clarify how the icon ended up in his hands, Al Jazeera reports.

"If it's true that this is an icon that comes from Ukraine, which was brought from Ukraine to Banja Luka, during the conflict in Ukraine, if it was stolen … then someone needs to go to jail," Komsic said.