The Guardian: Portuguese minister faces calls to quit over death of Ukrainian man

Ukrainian man was allegedly beaten and asphyxiated by officers at detention centre in March. 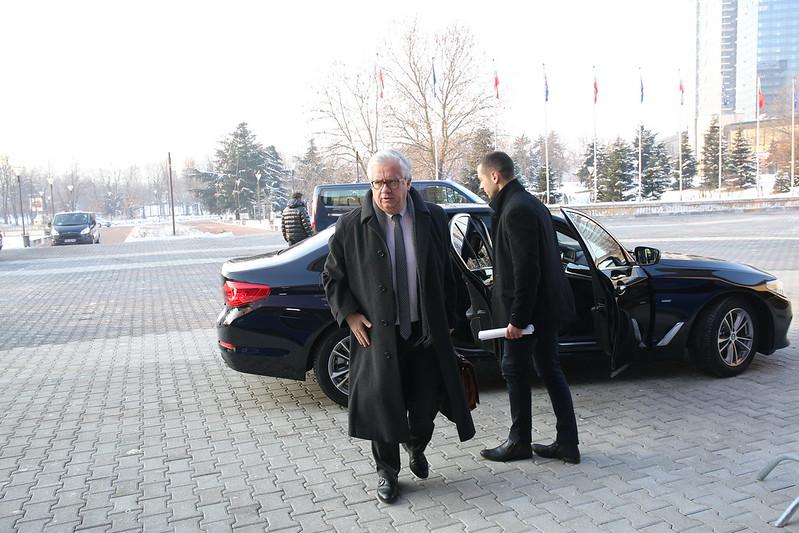 Portugal's home affairs minister is facing calls to resign amid outrage over the fatal beating of a Ukrainian man by border patrol officers at a detention centre at Lisbon airport in March.

It is alleged that Ihor Homenyuk, after two days in custody following his arrival without a visa and refusal to board a flight home, was beaten and asphyxiated by three officers who tied his arms and legs to restrain him, The Guardian reported.

Prosecutors, who have charged three officers with murder, said that when Homenyuk was on the ground the men "used an extendable baton and kicks to hit the victim in the torso. The offenders left the victim on the ground, cuffed and with his feet tied."

Eduardo Cabrita, the home affairs minister, last week announced the resignation of the head of Portugal's SEF border service as part of a restructuring plan to more clearly separate police and administrative functions in dealing with immigrants. He also agreed to send compensation to the victim's family.

Read alsoPortugal to pay compensation to Ukrainian family for fatal case at Lisbon airportThe opposition have called for Cabrita to go too, claiming he failed to have the incident properly investigated and for six months failed to offer support to Homenyuk's loved ones.

The minister said at a press conference last week that he had talked to the Ukrainian ambassador and extended his condolences to Homenyuk's family. He is due to face questioning by a parliamentary committee on Tuesday.

Duarte Marques, an MP with the opposition Social Democrats, said: "It's shameful that the Portuguese government has taken this many months to take this decision and only took it because of media pressure."

A home affairs ministry internal inquiry found that Homenyuk had convulsions a day before his death but SEF officers failed to provide him with epilepsy medicine.

The report, seen by the Guardian, details how Homenyuk was tied up with tape for more than seven hours without access to food or a bathroom, which led him to go into a "slow asphyxia … which ultimately resulted in his death."

His handcuffs were only removed during CPR, according to the document, and an autopsy revealed bruises, fractured ribs and bootmarks.

According to the report, several other SEF workers including a nurse entered the room several times during the hours when Homenyuk was allegedly beaten, and heard his screams but failed to stop or report the incident. The report concludes that officers "omitted the truth purposely to avoid any criminal or disciplinary action."

The death was initially attributed to a heart attack, but a postmortem examination and a police investigation concluded that the cause of death was "severe traumatic injuries" sustained during the alleged assault, according to the public prosecutor.

Read alsoPortugal's chief border guard quits after Ukrainian traveler's death in custodyCabrita then ordered the internal inquiry and fired the director and sub-director of Lisbon's border management. The airport detention centre underwent what he called "radical change" before it reopened.

Marques said the measures, which included installing panic buttons in holding cells, were not enough to address what he called "structural problems" in SEF's treatment of migrants and the conditions in its detention centres.

"Those who were there and are still there have to go. And if the minister doesn't fire SEF's board, he has to give his own place up," he said.

SEF refused to comment, but the union for SEF workers said in a statement last week that the "problem is not in who works for SEF […] it is absolutely clear that the known circumstances of what happened are in clear contradiction of the usual conduct of SEF officers."

The Portuguese prime minister, António Costa, has said he has "total trust" in Cabrita. The minister himself has said he has a "clear conscience" and full confidence in those now leading SEF.

He said Homenyuk's death was "completely unacceptable and something that goes completely against Portugal's respect for human rights", adding that the country was a "champion in the way it welcomes migrants".

Read alsoPortuguese immigration officers arrested on suspicion of killing Ukrainian – ReutersOksana Homenyuk, the victim's widow, feels differently. She hasn't told her children about the circumstances of their father's death.

"I never thought something like this could happen in a European country, where human rights are above all," she said in an interview with the Portuguese broadcaster SIC. "Every time I hear the word Portugal… I developed a hatred against that country, I can't even say that word. So many people saw him, so many people saw it and nobody helped. I still can't believe it."

Pedro Neto, the director of Amnesty International in Portugal, said Homenyuk's death might be an "isolated case" but reports of torture and mistreatment of immigrants by SEF suggested a systemic problem.

The EU's Committee for the Prevention of Torture has identified "a considerable number of credible allegations of ill-treatment by police officers" in Portugal, which it says are "not infrequent and not the result of a few rogue officers."