The detainee "pleaded guilty" on counts of organizing protests in Belarus. 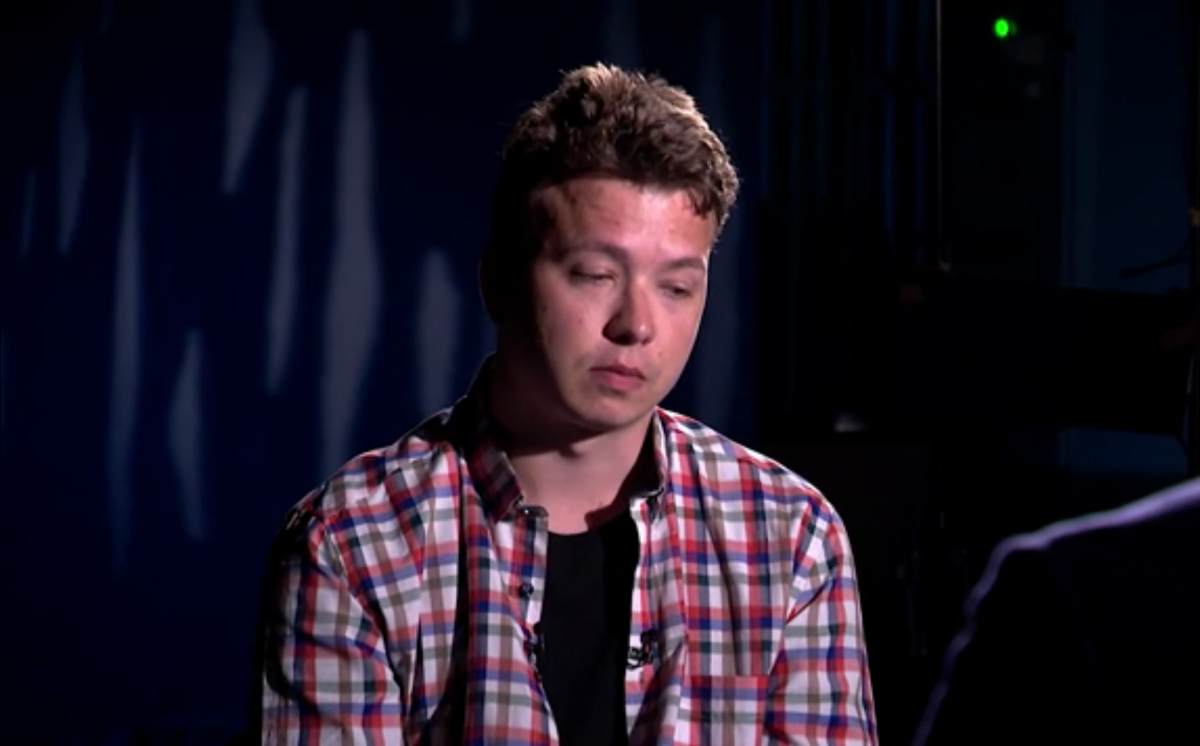 Belarusian dissident journalist and blogger Roman Protasevich, who was detained after a forced landing of his flight in Minsk, said that he had "pleaded guilty" of the organization of mass riots in Belarus.

He mentions this in an "interview" whose parts were posted by the pro-government Belarusian TV channel ONT (All-National Television) on Telegram on June 3.

"At first, I criticized him, but the more I got involved in political activity, the more I began to understand that many of the things for which Alexander Grigorievich [Lukashenko] was criticized for are in fact just an attempt to put pressure. And that in many cases he acted, I apologize for such an expression, like a man who got balls," he said.

He also "pleaded guilty" in a criminal case on organizing protests in Belarus.

"I openly admit this – I was one of those people who published calls for street protests. And then I admitted that the calls that I published together with others – they resulted in the fact that street riots started spinning out of control," Protasevich said on the Belarusian state TV channel.

He also said that the Belarusian opposition was considering a forceful scenario of seizing power. Allegedly, he spoke about this with Belarusian opposition leader Svetlana Tikhanovskaya in person. There were four to five groups that could have taken power by force – about 20 families of top security officials were their target. According to him, there are still several "sleeper cells" in Belarus.

In addition, speaking in the "interview," Roman Protasevich stated that:

At the same time, the opposition media in Belarus note that Protasevich is under pressure and is facing threats, so he was forced to give the "interview."

"We all are perfectly well aware that Roman Protasevich and his girlfriend Sofia Sapega are being held hostage by state terrorists. Interviews given under torture conditions are unethical, therefore it is not acceptable to publish them in the press. It is for these reasons that the European media did not publish confessions by Protasevich and Sapega," the Belarus Golovnogo Mozga channel on Telegram said. The channel has been designated by the Belarusian authorities as an extremist one.

Detention of Protasevich in Minsk

On May 23, 2021, Roman Protasevich, 26, a co-founder and former editor of the NEXTA channel on the messaging app Telegram, was arrested along with his girlfriend after his Ryanair flight had been made to land at Minsk Airport.

Shortly after, Belarus' KGB shared a video with the interrogation of the journalist. He appeared to have a small black spot on his forehead.

Protasevich is reportedly facing the death penalty in Belarus.

In November 2020, Protasevich and another co-founder of NEXTA Stepan Putilo, 22, were put on the wanted list; before that, a case had been opened against them for organizing mass riots in Belarus.

Russian media outlets have recently disseminated information about Protasevich's involvement in hostilities in Donbas. He allegedly was a member of Ukraine's Azov battalion. Protasevich's representatives denied the accusations. Leader of the National Corps in Ukraine Andriy Biletsky said that Protasevich was engaged exclusively in journalistic work at the front.