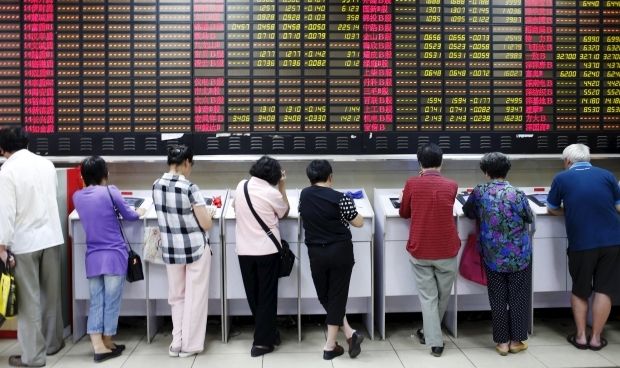 Investors rushed to sell what they still could after a fresh wave of share suspensions that has halted trading in half the market, according to The Financial Times.

The Shanghai Composite closed down 5.9% after falling as much as 8% at the open. The Shenzhen index lost 2.5%, while the start-up ChiNext board managed to inch up 0.5%.

The renewed selling followed another round of share suspensions overnight that have now halted trading in 1,476 stocks — or more than 50% of all listed companies on China’s two main exchanges. The suspensions have frozen $ 2.6 trillion worth of equity, according to Bloomberg calculations.

The sell-off was equally pronounced in Hong Kong, where global investors typically trade Chinese stocks. The Hang Seng index suffered one of its biggest point drops on record, shedding 5.8% to erase all its gains over the previous 12 months.

Hong Kong Exchanges & Clearing, the bourse operator, dropped 8.3%, taking its loss over the past five days to almost 30% and robbing it of its crown as the world’s most valuable exchanges operator. That now reverts to CME Group.

The Hang Seng China Enterprises index of large Chinese companies listed in Hong Kong tumbled 8.8%, and is now down a tenth since the start of the year.

As the stock rout continued, Beijing responded with further measures to steady the market. The People’s Bank of China said it was helping state-owned China Securities Finance Corporation access liquidity to help the fund “hold the line against the outbreak of systemic or regional financial risk”.

This is the clearest statement yet about what CSF is doing — buying shares directly using PBoC money, a big departure from its traditional role of lending to brokerages to support margin lending.

The CSF is also providing RMB 260 billion ($ 41.8 billion) of credit to brokerages in order to help them buy shares, according to the China Securities Regulatory Commission.

In a separate statement the CSRC added that the CSF would continue to buy blue-chips, but would also step up purchases of shares in smaller companies to “relieve the problem of strained liquidity”.

In its statement ahead of Wednesday’s open, the CSRC had noted: “There is a mood of panic in the market and a large increase in the irrational dumping of shares, causing a strain of liquidity.”

In a further effort to halt the rout, China’s state-sector administrator instructed government-owned companies not to sell shares, while the insurance regulator said it had cleared “qualified insurers” to increase their asset allocation to equities.