The construction developer is going to challenge the decision in the Supreme Court of Ukraine. 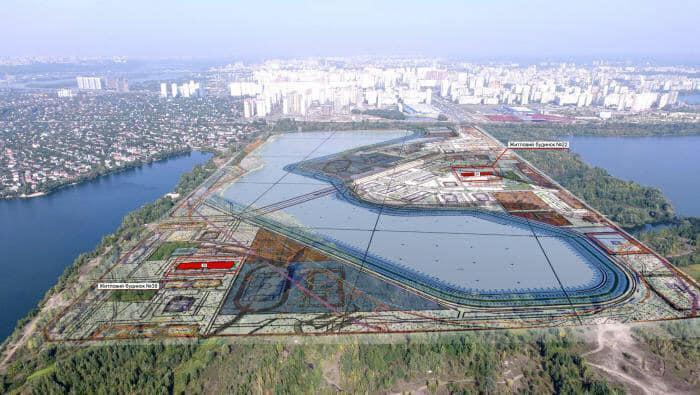 Kyiv's Court of Appeals has upheld a lawsuit lodged by NGO Osokorky Ecopark (Osokorky Wetland Park), seeking the cancellation of a permit for the construction of a notorious residential complex, Patriotyka on the Lakes, consisting of over 40 high-rise buildings near lakes in the Osokorky area on Kyiv's left bank.

"Another precedent is when the city can successfully interact with the community," Ukrainian MP Dmytro Belotserkovets wrote on Facebook on June 13, commenting on the court's decision.

Belotserkovets recalled that Kyiv City Council in January 2019 passed a draft resolution in its second reading to terminate a land lease agreement with LLC Kontaktbudservis, which leases the plot of land for the Patriotyka on the Lakes residential construction project. The legal reason for this decision is UAH 65 million (US$2.3 million) debt owed to the city for the lease of land, he said.

Members of Kyiv City Council were also prompted by inadequate actions by the construction developer, who promised to adjust the construction project in line with the local community's demands and submit it to the city planning council. But the developer failed to do this and resumed the active construction phase.

The city allocated the plot of land near Lake Nebrizh in Kyiv's Osokorky back in 2005, now it is owned by LLC Kontaktbudservis. The construction developer, Bank Arkada, wants to build one of the largest residential complexes in Kyiv on that site – forty-three 24-27-storey buildings.

Commenting on the appeals court's ruling, Bank Arkada said on its website on June 12 it was going to challenge the decision in the Supreme Court of Ukraine.

As UNIAN reported earlier, by its decision, Kyiv City Council in January 2019 backed the termination of lease agreements with the developer related to five land plots totaling 176 hectares in Kyiv's Osokorky neighborhood (Osokorky-Tsentralni residential area). It also obliged Kontaktbudservis to leave the land plots leased, having brought them in condition suitable for further use.

Oleksiy Petrenko, a lawyer at NGO Osokorky Ecopark, emphasized that the illegality of the building was confirmed by the fact that the land plots were granted the status of a "landscape zone being under protection" way back in 1979. Moreover, the lands are subject to normative and legislative acts on national heritage.

In addition, Kyiv City Council's voting in 2002 and 2007 confirmed the status of the area. The land plots also belong to recreational and park zones under Kyiv's 2020 General Plan.

The lawyer also drew attention to the fact that when concluding the land lease agreement, it was not taken into account that the major area of 176 hectares of the allotted land was a water body.