"I don't like gangsters," the president said after his bodyguards led the official out of the hall. 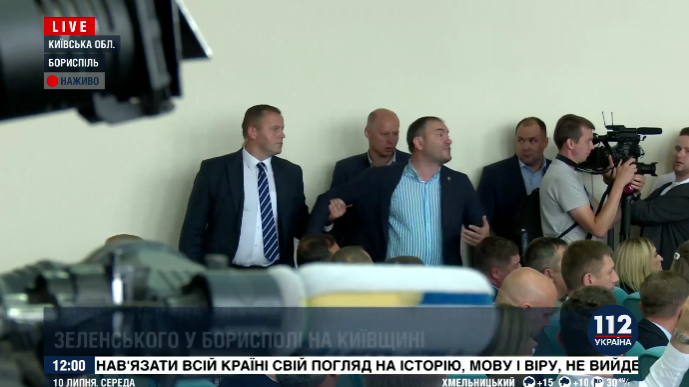 Ukraine’s President Volodymyr Zelensky had a regional official expelled from a meeting broadcast live on television on Wednesday because of the latter's past criminal record.

"Get out of here, rogue! Are you not hearing me well?" he told Yaroslav Hodunok, to applause from other officials present at the otherwise routine meeting, Reuters reports.

The official threatened legal action against Zelensky, telling a newspaper the 2002 case against him was trumped up.

Zelensky was meeting officials from Kyiv region to discuss projects including a new city hospital yet to be built.

Hodunok, local council secretary and member of the Batkivshchyna Party of former prime minister Yulia Tymoshenko, said there were problems with financing.

Zelensky said Hodunok talked a lot but did nothing, then read from his phone what he said was his criminal record for robbery and violence.

"Tell me whether it is true or not ... a secretary of Boryspil city council was previously convicted of ... robbery, combined with causing serious bodily injuries. Yaroslav Mikolayovych, is that you?" he asked.

"I don't like gangsters," the president said after his bodyguards led Hodunok out of the hall.

The previously little-known official told reporters afterwards he would take the president to court.

He told Ukrayinska Pravda newspaper the 2002 case against him had been falsified. The paper published a photocopy of a court ruling in which Hodunok received a conditional sentence.

It is worth noting that Hodunok supported Zelensky at this year's presidential elections, calling him an "honest" candidate for president. Hodunok's posting on a social network praising Zelensky has resurfaced today following the altercation with the president, as many on social networks mocked the disgraced official.

Zelensky ran for president despite having no previous political experience. He had been playing the TV comedy role of a schoolteacher who unexpectedly becomes president after a student films his foul-mouthed tirade against corrupt politicians and uploads the video online, Reuters notes.

His presidential campaign exploited parallels with that fictional narrative, portraying him as an everyman who would stand up to a crooked political class.

If you see a spelling error on our site, select it and press Ctrl+Enter
Tags:BoryspilZelensky