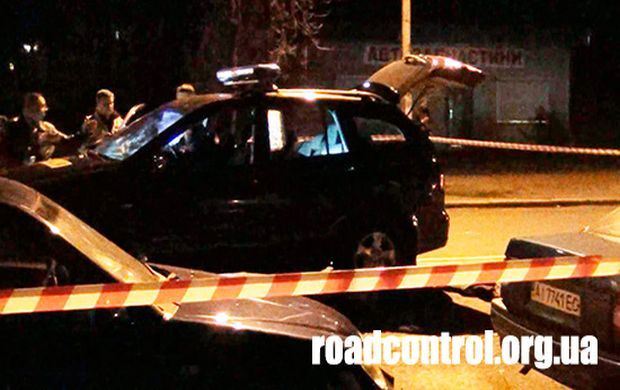 A picture from the site of the crime / Photo from roadcontrol.org.ua

The stories given by some activists who personally know the detained suspects differ from those preliminarily announced by the Ukrainian police, Ukrainian weekly news magazine Novoe Vremya has reported.

Thus, among the possible theories are revenge, robbery and an ideological conflict. According to the police's official version, four young men robbed a gas station, stealing about UAH 800, on the night when the killings took place. Two policemen were shot dead and three were wounded while chasing the robbers. One of the robbers was also killed.

Shortly after activists named the detainees – Vita Zaveruha, Andriy Romaniuk, Vadym Pinus, Mykola Monishenko, and Yevhen Koshelok. All of them, including the young woman, were Maidan activists, and then were volunteers in the Aidar, Azov and Shakhtarsk battalions in the anti-terrorist operation (ATO) zone in the Donbas.

Kyrylo Sergeyev, the head of the ATO Veterans Society, says that the shooting between the police and the young men, which took place in a park, not at a gas station, as in the police report, was preceded by a quarrel on the grounds that the young people were activists of the Maidan and the police officers were on the opposite side of the barricades, in the literal sense, during the Euromaidan protests.

Novoe Vremya writes that there is another theory - that the suspects deliberately shot the former Berkut riot police officers, motivated by revenge.

However, some activists, namely those from the Roadcontrol public organization, claim that there are a number of inconsistencies in the case, citing the police's radio communication on the night when the crime was committed.

Another Maidan activist, Yevhen Karas, says that those who were acquainted with the suspects claim that there was some sort of a frame-up.

"They say even if [the suspects] shot somewhere, they didn't rob the gas station. I also went to that gas station. The employees there confirm that the shooting occurred, a gas station operator was shot with a machine gun, and his arm was wounded. It's obvious they cannot identify the one who was firing – it was at night. I learnt that the robbers were even wearing masks. If these were the [activist] guys or not – it's not clear," Karas said.

The police reported that a police car had been shot in the yard and then it had been blown up with a grenade.

"In fact, it was attacked in the middle of the road. It looks like it wasn't the police car that was chasing someone, but it was that someone who caught up with the car and 'peppered' it. It's more likely that someone shot a patrol of [former] Berkut officers," he said.

The activist states there is footage from a surveillance video camera at the gas station, but it has not been made public. Karas notes that the police's All Points Bulletin in the radio communication mentioned a shot patrol rather than a robbery at a gas station, but "this could be solely a technical factor in police [work]."

Karas argues there are many other inconsistencies if one looks "at the raid on the room where they [the suspects] were at the moment of arrest. There are two versions. Some say it was a raid, others claim it all was quiet."

On the other hand, the activist stresses, they were a gang that were planning some radical political acts.

"It's obvious they were going to shoot someone. They were very disappointed [at the events in the country after the Revolution of Dignity]. And they started to evaluate everything very pessimistically after the war [in eastern Ukraine]. They served with the Aidar, survived [severe fights near the village of] Metalist [where the Aidar was defeated], all these ceasefires, pockets. They have been living through all this, they have gone off their heads indeed, and they were one step away from violence," Karas said.