The head of state says the next goal for Ukraine is to host the UEFA Super Cup or the final of the Europa League. 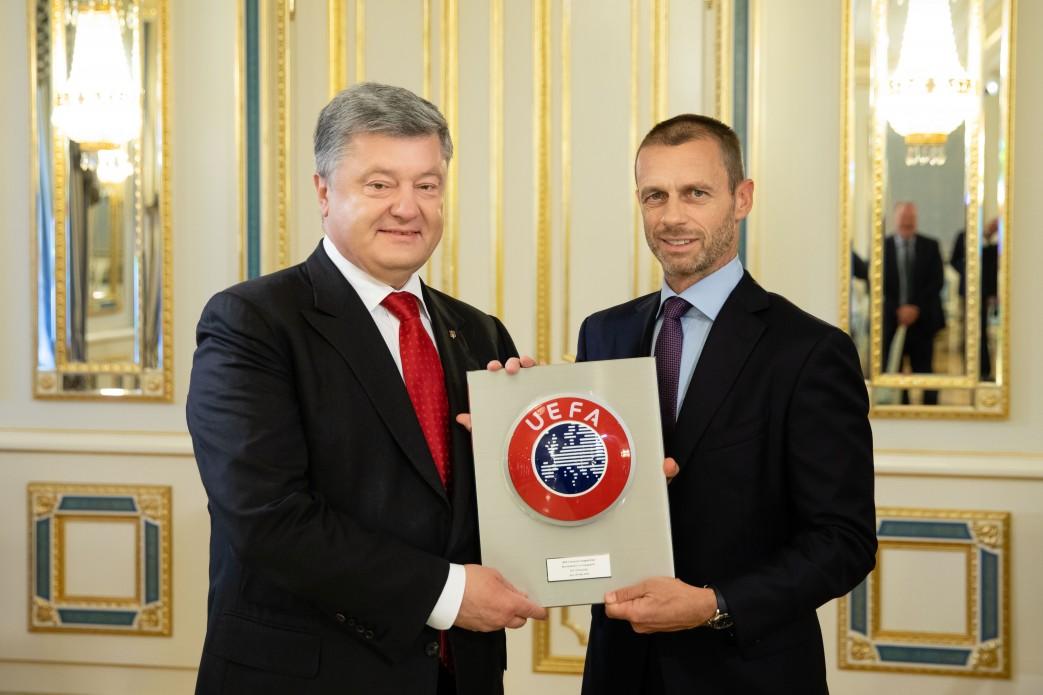 Ukrainian President Petro Poroshenko had a meeting with UEFA President Aleksander Čeferin in Kyiv on May 26.

The head of state noted that holding this year's Champions League final in Kyiv is an expression of confidence in Ukraine by the international community. This will provide additional impetus for the development of football in Ukraine, especially children's one.

Poroshenko stressed that it was already a good tradition to hold pan-European events in Kyiv. In his words, the next goal for Ukraine is to host the UEFA Super Cup or the final of the Europa League.

He also invited Aleksander Čeferin to visit one of the cities in the Ukrainian Donbas as a goodwill ambassador.

The head of state noted the principled position of UEFA regarding the non-recognition of the change in the status of the Crimean peninsula.

"The presence of the Champions League Cup during the celebration of the 60th anniversary of Tavriya Simferopol football club, revived on the mainland Ukraine, was symbolic," the presidential press service quoted the head of state as saying.

In turn, the UEFA President thanked Poroshenko for the high professional level of the preparation of the great football event. Particular attention was paid to the hospitality and sincere hosting of foreign guests, including fans, by the Ukrainian side.

The Ukrainian president stressed that he supports both clubs.

"When asked which club I support – Real or Liverpool – I say that I support both clubs. My son Mykhailo, who played for Dynamo children's team in the past, is a big fan of Liverpool. He has everything in the colors of this club. But my daughter Yevheniya is definitely for Real. Thus, my house definitely supports both clubs," Poroshenko added.

As UNIAN reported, Real Madrid and Liverpool will face off in Kyiv May 26 for the major European football trophy.

The Champions League final for female teams was held at the Dynamo Arena named after Valeriy Lobanovsky on May 24.

The women's football team of the French Lyon has become the five-time winner of the UEFA Women's Champions League, having won with the score 4:1 from the German Wolfsburg.

If you see a spelling error on our site, select it and press Ctrl+Enter
Tags:CrimeaDonbasKyivmeetingpresidentfootballUEFAfans