The election hopeful candidate said he was withdrawing from his business project, the Studio Kvartal 95 production. 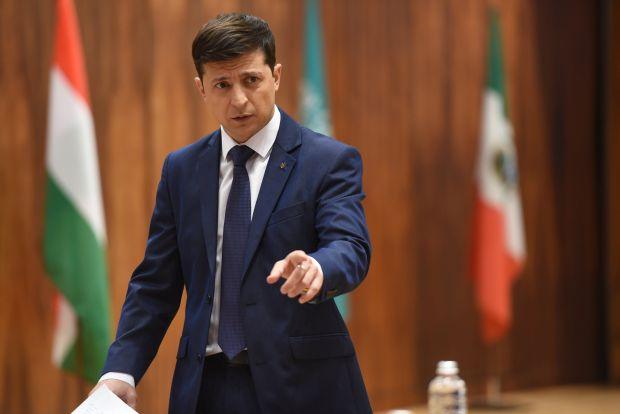 Zelensky said he wants to "break the system" as president. "The system – it looks like a deck of marked cards, where the kings and sixes have been rotating all these years, and the stake is very high, the stake is terrible – it's human life," Zelensky said.

According to the presidential candidate, one of his first initiatives will be the bill on impeachment. He said he had become popular and wealthy "thanks to this country, thanks to Ukraine."

"Therefore, this is a goal for me, I don't see any obstacles, I'll bring in smart people. If I fail, I'll leave. Therefore, I'm running for president for five years and propose the law on impeachment as one of the first laws," he said.

In addition, he said that, if he is elected as president, he would not be ready to issue an order for the liberation of Donbas by force.

He also assured that, if elected, he would ensure stable operations of the state-owned PrivatBank and that he would not intend to "hand it over" to anyone.

"As for PrivatBank, we need to get a deeper understanding of this issue... This is a global and problematic decision for the next president," Zelensky said.

"Regarding PrivatBank, whatever the developments are, I will be defending Ukraine," he stressed.

Zelensky also said he was withdrawing from his business – the Studio Kvartal 95 show production.

"I'm out of business, I'm leaving the Studio Kvartal 95. I will not go out within five years like someone from some factory. That is, I stop being a partner for someone," he said.

As reported earlier, the candidate also introduced members of his team set to work alongside if he is elected president in the April 21 runoff.

"These are professional people, specialists, young people, bright, intelligent people who will go to the Presidential Administration with me. We do not distribute posts, we give positions – who of them will be the best that will get this or that position," he said.

Zelensky described the members of his team as "volunteers in politics."

"Jointly with these people, we will be building a strong and powerful Ukraine, which is not Russia's small sister, which is not a corrupt partner of Europe, but our independent Ukraine," he added.

"About our experts: Ruslan Stefanchuk is our visionary, he is responsible for reforming state and legal institutions and legislative work, a great scientist;

Ivan Bakanov, the head of the Servant of the People Party, he is responsible for interaction with the Verkhovna Rada of Ukraine;

Oleksandr Danylyuk [takes care of] international relations, economy, financial and banking policy – Oleksandr was a minister, this is his only drawback;

Ruslan Ryaboshapka [is for] law enforcement and anti-corruption policy;

Halyna Yanchenko is an expert on anti-corruption policy and digital solutions for the state;

Serhiy Ionushas [will be responsible for] the justice system;

Ivan Aparshyn is a security and defense expert;

Iryna Venediktova is responsible for reforms in the judicial system;

Viktoria Strakhova is responsible for the banking sector;

Oleksandr Merezhko is an expert on international relations and democracy;

Serhiy Kalchenko is an expert on electoral legislation, European standards in the field of human rights;

Andriy Gerus is responsible for energy, housing and utilities services and antimonopoly regulation;

Serhiy Babak is an expert on education and science;

Yevhen Komarovsky is an expert in the field of medicine," he said.