The Ukrainian leader mulls a reconciliation memorial at the border, while Poland is set to refurbish Ukrainian memorials on its territory. 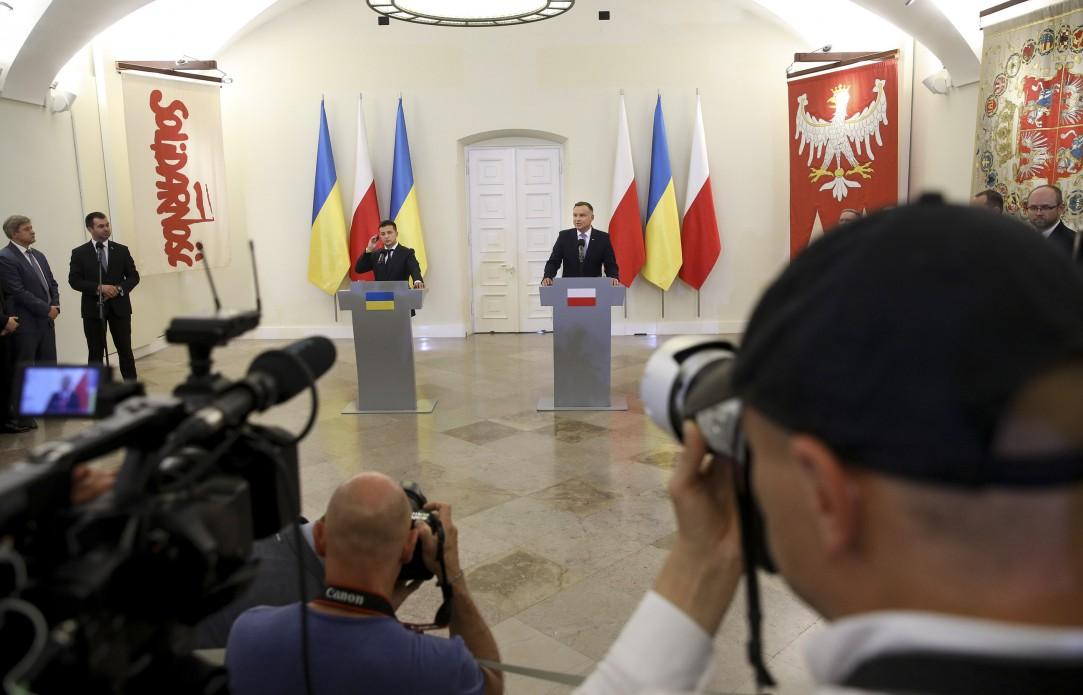 President of Ukraine Volodymyr during his Poland visit announced readiness to lift a moratorium on exhumation works as part of the efforts to search the remains of Poles who died during World War 2.

"I'm ready to unblock the receipt of permits for search operations in Ukraine, while the Polish side will refurbish the Ukrainian memorials in Poland," Zelensky told a joint press conference with Polish President Andrzej Duda in Warsaw on Saturday, according to an UNIAN correspondent.

Besides, Zelensky invited Duda to establish a reconciliation memorial on the Ukraine-Poland border.

"Today I discussed with President Duda the existing historical issues and those of modern times. I am glad that in our relations there are no issues that we could not solve by dialogue and mutual understanding. This is the most important thing," Zelensky said.

The Ukrainian president noted that tensions between Ukraine and Poland became a "wonderful gift" for adversaries.

"We agreed to renew and reload the bilateral working group, which will work under the patronage of both presidents – of Poland and Ukraine – so that all the 'dark spots' of the past do not prevent our peoples from building a bright future together. I really, really believe in this," the head of the Ukrainian state emphasized.

As UNIAN reported earlier, Ukraine imposed a ban on exhumation works by Polish experts at locations where the Poles died during WW2 over the inaction of Polish authorities to prevent acts of vandalism at the graves of and monuments to Ukrainians in Poland, as well as over the inaction of Polish authorities on the restoration of numerous sites that have been destroyed.

On Feb 22, 2018, then Vice Prime Minister, representative of Ukraine in the joint Ukrainian-Polish commission on historical issues, Pavlo Rozenko, said that Ukraine was asking Poland to restore the destroyed Ukrainian monuments, following the example of the Ukrainian side, which investigates any acts of vandalism regarding Polish monuments in Ukraine and restores them.

Rozenko also said that the resumption of cooperation between Ukraine and Poland in the matter of joint work on the search for the remains of fallen compatriots depends on the decisions made in Warsaw, including in the context of amending the law on the Institute of National Remembrance, which provides for a ban on the ideology of Ukrainian nationalists.

If you see a spelling error on our site, select it and press Ctrl+Enter
Tags:PolandWW2historyexhumationreconciliationZelensky