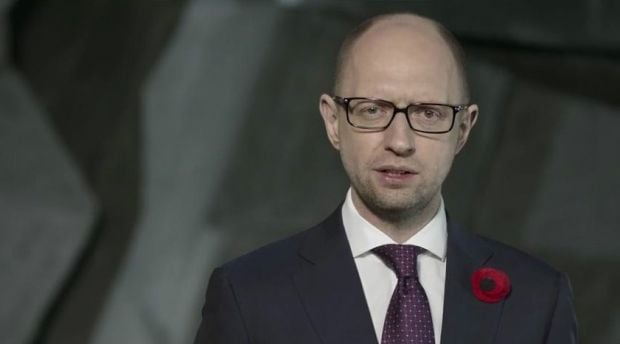 The new holiday symbolizes Ukraine’s sharp break with Russia following Moscow’s invasion and annexation of the Ukrainian territory of Crimea last year. Ukraine is celebrating the victory in Europe over Nazi Germany on the same day as western European countries, while Russia and other countries still firmly within Moscow’s orbit celebrate on May 9, the day news of victory reached the Kremlin in 1945.

"Seventy years ago in Europe we saw the end of the Second World War - the most terrible and cruel war in human history,” Yatseniuk said.

“Today, we pay tribute to the tens of millions who died, and celebrate the victory won by the peoples of the anti-Hitler coalition. It was a victory over a crafty aggressor who trampled international law mocked the Treaty of Friendship, [and] who sought to destroy half of the world.

“This is a very important lesson of the Second World: Any aggressor who raves about new territories, rattles sabers and neglects the will of the people, will certainly repeat the fate of Hitler's regime.”

Yatseniuk noted that Ukraine had suffered huge losses during the war.

"Seven million Ukrainians went to the front, and half of them died. Half of the survivors came back crippled. Ukrainians fought against Nazism in the Red Army, and the Ukrainian Insurgent Army, and in the armies of the anti-Hitler coalition. During the war, the population of Ukraine decreased by 14 million people.”

Yatseniuk said that as one of the victor nations in the Second World War, Ukraine would never forget the contribution made by other nations to the victory over Nazism, and would always deeply honor them.

He said that the “desecration of the memory of millions is an attempt by Kremlin falsifiers attribute the victory to one people, and wipe out the feats of all the others.”

He also referred to the current conflict in Ukraine, which is widely seen in Ukraine not as a civil war or insurgency, but a covert war waged by Russia against Ukraine.

"The war of Russia against Ukraine is a historic crime," the prime minister said, expressing confidence that Ukraine would win this war.

"Then, we were defending their land, while we are defending our country today. We won then, and we will win today,” Yatseniuk said.