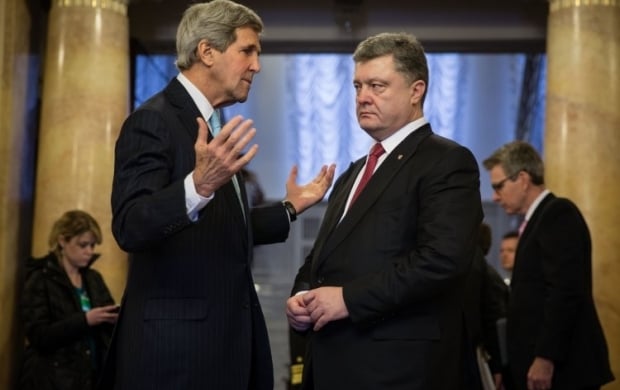 Ukraine remains on top of the U.S. foreign policy agenda / Photo from UNIAN

Ukrainian President Petro Poroshenko has announced this at a meeting of the National Council of Reforms when briefing on his talks with U.S. Secretary of State John Kerry and U.S. Assistant Secretary of State for European and Eurasian Affairs Victoria Nuland, and on his recent meetings with European leaders in Germany.

Poroshenko stressed that Ukraine was still one of the most important issues of the U.S. foreign political agenda and noted diplomatic efforts by the United States in the bilateral dialogue with Russia aimed at ensuring the full implementation of the Minsk peace agreements.

"There is no alternative to the full implementation of the Minsk agreements. This position is clear and coordinated with both the U.S. and our partners in the Normandy format – Germany and France," Poroshenko said.

The Ukrainian president emphasized that the issue of Crimea also remained among the top priorities.

"My efforts, as well as efforts by the Parliament and Government, particularly the Ministry of Foreign Affairs, yield fruit. We manage to secure international solidarity," the president concluded.

However, he  added, Ukraine has to demonstrate progress in ensuring the security of its borders, provide efficiency and combat capability of its armed forces, succeed in economic and judicial reforms, as well as put an end to corruption.