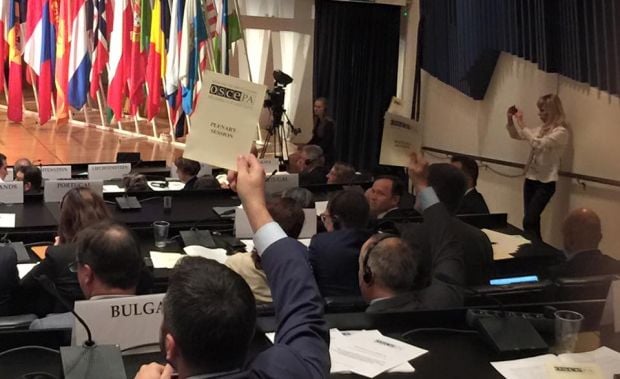 The OSCE parliamentarians voted by a margin of 96 in favor to 7 against with 32 abstentions on the resolution, which condemns Russia's "unilateral and unjustified assault on Ukraine's sovereignty and territorial integrity."

The OSCE Parliamentary Assembly also expressed its "grave concern" over increasing militarization in Crimea and Sevastopol and statements by some Russian officials indicating an intention to deploy nuclear weapons in that region by Russia, actions which undermine global, European, and regional peace and security.

In addition, the OSCE Parliamentary Assembly condemned the deteriorating human rights situation in Crimea and Sevastopol, including intimidation, harassment and discrimination directed against the Crimean Tatar and ethnic Ukrainian populations, violations of freedom of religion, and violations of media freedom that include censorship and the closure of independent media outlets such as the television broadcaster ATR.

The OSCE parliamentarians also urged the Russian Federation, as the occupying power in the Autonomous Republic of Crimea and the city of Sevastopol, to permit and facilitate the work in that region of international organizations and human rights NGOs, the OSCE High Commissioner on National Minorities, the OSCE Office for Democratic Institutions and Human Rights and the OSCE Special Representative on Freedom of the Media.

The OSCE Parliamentary Assembly has gathered in Helsinki for its 2015 Annual Session on July 5-9.