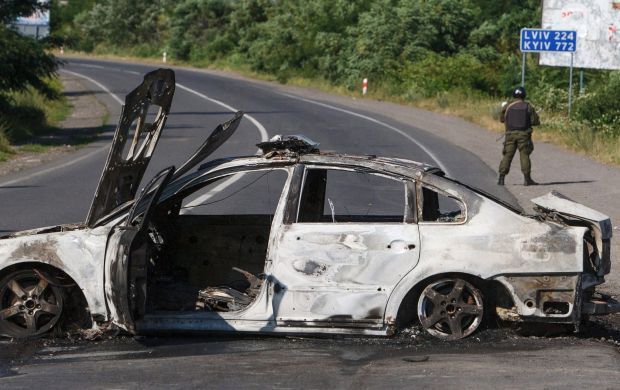 "I got a phone call from the commander, nom de guerre Litun, of a group of [Right Sector] fighters who have been surrounded in Mukacheve, who asked to put him through with the chief of the SBU's Anti-Terrorist Center to negotiate an end to the armed stand-off and help for the wounded fighters, which I did immediately," Gerashchenko wrote on Facebook on Saturday evening.

He predicts the conflict will be fully resolved peacefully, in keeping with Ukrainian laws.

"Then we'll have to conduct an independent investigation with the engagement of mass media and human rights activists to establish what in fact happened in Mukacheve, what caused the conflict, which has resulted in deaths and injuries of many people," he wrote.

According to information available, nine people, including three passers-by, fell victim to the shooting in Mukacheve on Saturday, which happened with the involvement of members of the Right Sector organization. Three persons were killed in the incident.

"A group of 15-20 armed men arrived at a facility connected with MP Mykhailo Lanyo, who had sobering experience from the [gangster] 90ies," Gerashchenko wrote in his earlier post on Facebook.

He also posted the footage made by local residents, showing how the shooting incident began.

Police patrols arrived at the scene and were attacked by the men with the use of small arms and grenade launchers. Two police cars were destroyed by grenades.

SWAT police and National Guard special units were sent to Mukacheve to reinforce the SBU security service forces, which are in charge of this operation.

Leader of the Ukrainian Volunteer Corps of the Right Sector organization, MP Dmytro Yarosh wrote on Facebook that he had learnt about the incident when he was meeting with his voters at the electoral constituency, and informed that he was going to Kyiv. "The most important thing now is to stabilize the situation and prevent further bloodshed," he wrote.

In his words, it is necessary to "arrest the gangsters and those police officers who gave the order to open fire."