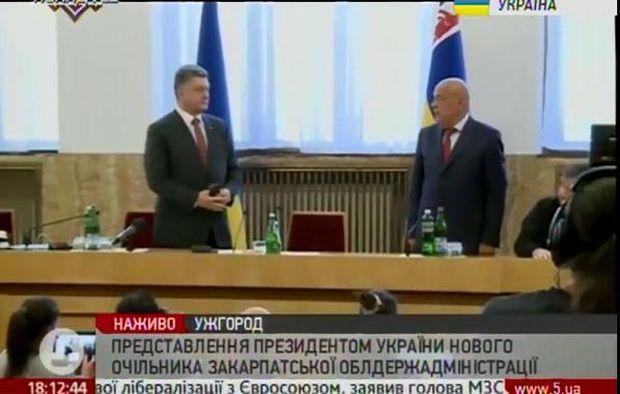 “I made a decision … I signed a decree on appointing Hennadiy Moskal chairman of the Zakarpattia regional state administration,” said the president.

Poroshenko said that he had to take one of the best governors out from the frontline Luhansk region and appoint him to Zakarpattia.

The President stressed that, while heading the regional military and civil administration in Luhansk region,  Moskal has proved that there are honest Ukrainian authorities, always at the forefront, fighting the enemy along with the military.

According to 5.tv, Poroshenko said that Moskal proved, “it is possible to block smuggling even amid the fighting. And he has the authority not only among the soldiers, whom he was helping at the very front end."

The President noted that he had to arrange Moskal’s transfer to another region hastily.

"Against the backdrop of these developments, while Ukrainians are dying, while we are preventing the Russian army from going on an offensive against Ukraine, amid the attempts to do our best to keep Russia isolated, in the wake of tomorrow’s voting in parliament for one of the most important reforms, I, as president, had to set everything aside and take emergency measures to fight the fire in Zakarpattia and pick up one of the best governors from Luhansk and redirect to [a place] where he had already worked,” said the President.

A shootout occurred in the city of Mukacheve in Zakarpattia region on July 11, between the fighters of the Right Sector organization, the local police, and local "security guards" of one of the MPs.

Several Right Sdector fighters were killed in a standoff with law enforcement officials, and some were surrounded.

A number of decisions on Human Resource management in Zakarpattia customs office have followed.