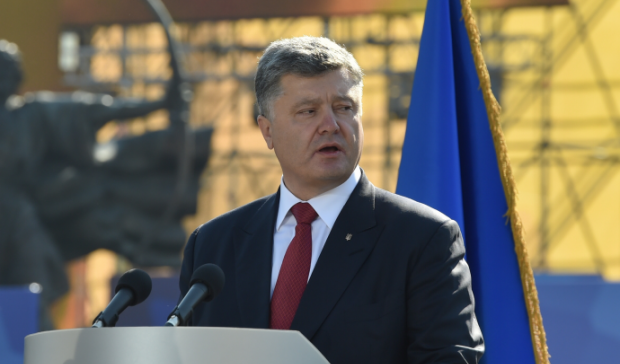 Poroshenko addresses the nation on the occasion of the 24th anniversary of Ukraine's Independence / Photo from president.gov.ua

"Ukraine existed, exists and will exist. But Novorossiya is the same myth as famous writer Tolkien's Mordor," Poroshenko said in his official speech at the March of Independence on Kyiv's Khreschatyk Street on Monday.

Ukraine still continues fighting for its independence in Donbas, he said.

The president said he did not rule out further direct invasion of Ukraine.

"The Russian armed groups near our eastern borders today exceed 50,000 men, while there are over 40,000 troops in occupied territories. Of them, there are 9,000 officers of Russia's regular armed forces who thus form units of the Russian army in our territory," Poroshenko said.

"Independence Day almost coincides with the one-year anniversary of the Ilovaisk tragedy, which followed the direct invasion of Russian troops in Ukraine's territory. A year has passed, but the deep wound is still unhealed and hurts," he said.

"All in all, the neighboring state's aggression claimed the lives of nearly 2,100 our soldiers. Eternal memory to the heroes who died fighting for a free and independent Ukraine. Eternal glory to them! We will never forget and never forgive!" he added.