Merkel with Poroshenko: No new format of talks on Ukraine needed 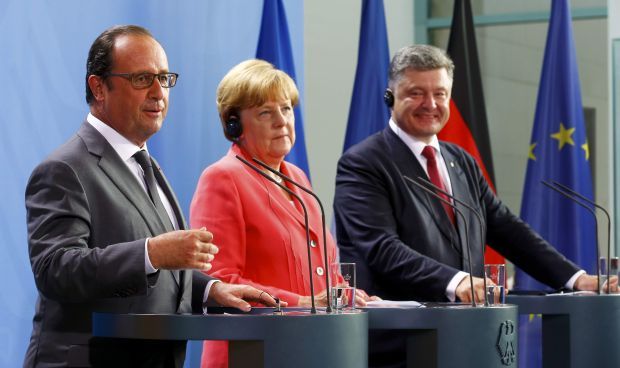 "We have gathered to discuss the reinforcement of the Normandy format and critical issues. All three of us are confident that the Minsk agreements should be foundation for restoring peace," Merkel said.

In her words, the sides agreed they would work in the Normandy format instead of creating a new one.

At the same time, Merkel said that the ceasefire in Donbas had not been observed, which causes both civilian and military casualties. "Everything that was agreed in Minsk should be fulfilled, weapons with caliber smaller than 100mm should be withdrawn," she said.

Poroshenko assured the French and German parties that Ukraine was ready to do this, she added.

Merkel also said that the OSCE Special Monitoring Mission to Ukraine "cannot work" in Donbas, and this issue should be resolved.

Poroshenko in turn said that he was sure that there was no need to create a new format of talks to settle the Donbas conflict. "As for new formats, I'm confident we don't need new formats. We've got the Minsk format, the Normandy format. I'm sure we're able to resolve all the necessary issues within the framework of these formats. Should there be any wish, we've got other experience, for example, G7 nations gathered for a NATO summit in Britain to discuss these issues, and other issues were discussed in the Geneva format. We're ready to cooperate. But I believe that the Normandy format is the basic one, which has proven to be efficient," Poroshenko said.

As UNIAN reported, on August 24, Poroshenko is on a working visit to Berlin, where he has met with Merkel and Hollande. Russian President Vladimir Putin was absent, yet Merkel said that a telephone conversation had taken place with Putin at the tripartite talks with Hollande and Poroshenko in Berlin earlier on that day. Poroshenko is planning to return home on the same day.