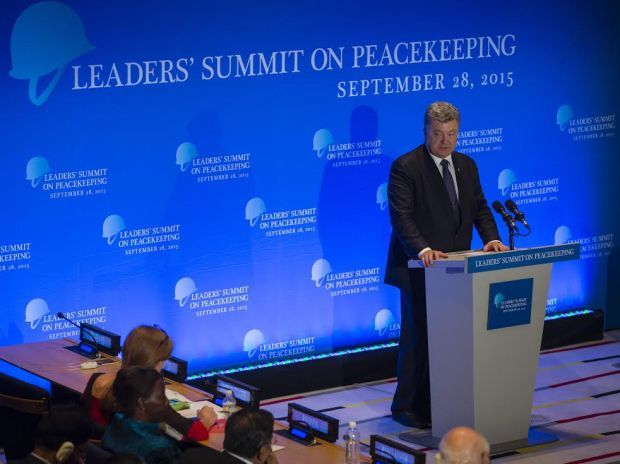 "Should Ukraine gain a seat in the Security Council for the term of 2016-2017 at the elections to be held in just a few weeks, the issue of consolidation of UN peacekeeping will be among our key priorities," Petro Poroshenko said drawing attention to the initiative to boost the capacity of UN peacekeeping operations by filling its critical gaps, in particular an "aviation" one.

The President also pointed to a need to strengthen cooperation of the UN Security Council with troop- and police-contributing states, as well as to ensuring security of "blue helmets."

"Ukraine has well deserved its reputation as a "peacekeeping nation." Since its independence, more than 34,000 Ukrainian "blue helmets" have participated in over 20 operations under UN auspices, bringing peace and security to war-torn regions. The courage of Ukrainian helicopter pilots in the UN Operations in Cote d'Ivoire and Liberia has become legendary," the President said noting that Ukraine and its servicemen continue supporting UN peacekeeping operations in the world.

"Ukraine remains one of the main contributors of military helicopters to the UN – the most needed and looked-after asset and enabler in today's complex missions. We are ready to beef up UN operations with up to 6 Ukrainian military helicopters from Liberia and Côte d'Ivoire after the finalization of UN operations in these countries," Poroshenko said emphasizing that Ukraine was willing to do that in the extremely difficult security condition being an object of aggression of the Russian Federation.

In this context, the President noted that the Ukrainian Armed Forces and volunteers were desperately fighting against treacherous Russian aggression in Donbas. According to him, Ukraine needs support and assistance of the United Nations these days.

"I believe that we can find the common approach and success of our coordination and cooperation will be the best and inspiring signal to the world on efficiency of the Organization under the pressing security challenges" Poroshenko said.

The Ukrainian President also informed the audience about the establishment of joint Ukrainian-Polish-Lithuanian brigade consisting of 2,000 soldiers, including 527 Ukrainian soldiers, with a view to, among other objectives, participating in international peacekeeping operations based on the UN Security Council mandate.

As UNIAN reported earlier, Petro Poroshenko also stressed that the UN reform was essential for preservation of global peace and strengthening the activity of the United Nations.