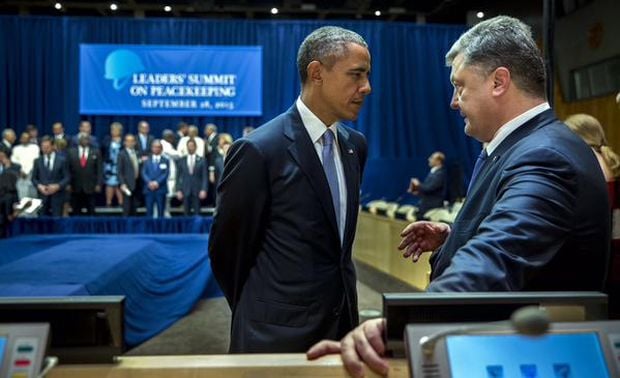 "A very serious conversation between the presidents of Ukraine and the United States took place," Permanent Representative of Ukraine to the UN Yuriy Sergeyev tweeted, without disclosing details.

The information on this conversation was not immediately reported on the presidential website.

Sergeyev also posted on Twitter a photo showing the two leaders were talking eye to eye.

As reported earlier, Ukrainian Foreign Minister Pavlo Klimkin said that Poroshenko would meet with Obama between a lunch with UN Secretary General and the Peacekeeping Summit. "There will be a short meeting, they will discuss a few issues, the details of which I cannot disclose," Klimkin said.

The same day, U.S. President Barack Obama and Russian President Vladimir Putin held a 90-minute meeting behind closed doors. It is reported that they were discussing the Syria and Ukraine crises.

The President's press service later disclosed some details of the meeting between Poroshenko and Obama.

"President Obama reiterated support for Ukraine and the efforts of President Petro Poroshenko aimed to protect territorial integrity and sovereignty of Ukraine," said the report.

"In the course of the conversation, President Obama emphasized that the United States would continue to support Ukraine in implementing reforms and finding a diplomatic solution to the conflict," said the President's press service.