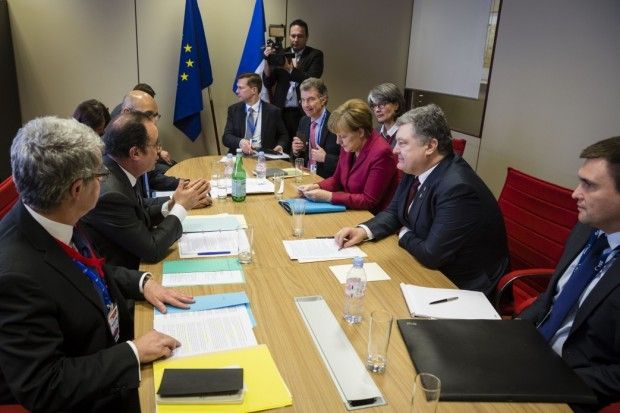 Poroshenko has met with Merkel and Hollande / Photo from president.gov.ua

The Minsk implementation was on top of the agenda of Petro Poroshenko's meeting with German Federal Chancellor Angela Merkel and French President Francois Hollande in Brussels on Thursday, the Ukrainian president's press service said.

What is more, the parties expressed concern over recent escalation in Donbas, the east of Ukraine. They underlined the importance of observing a truce, withdrawing Russian military equipment and ensuring full and unhindered access for OSCE monitors to the entire occupied territory and uncontrolled sections of the Ukrainian-Russian border.

The parties also pointed out the importance of holding local elections in some areas in Donetsk and Luhansk regions under the Ukrainian legislation and the OSCE principles provided that the security component is ensured.

The three leaders also called on Russia to immediately release Nadia Savchenko, who is illegally remanded in custody.

They emphasized the importance of freeing all prisoners of war, as is stipulated in the Minsk agreements.

Merkel and Hollande reaffirmed that the EU does not recognize the occupation of Crimea by Russia.

They also expressed support for the Ukrainian reforms.